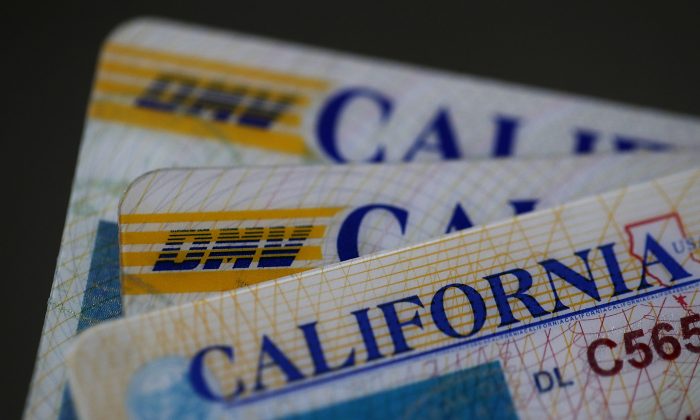 In this photo illustration, the California Department of Motor Vehicles (DMV) logo appears on a California driver license in San Anselmo, Calif. on May 9, 2017. (Photo Illustration by Justin Sullivan/Getty Images)
Southern California

Businesses making profits from booking appointments at California Department of Motor Vehicle (DMV) might soon face a fine of up to thousands of dollars under a new bill proposed on Jan. 31.

AB 317, which was authored by newly-elected Assemblymember Tyler Diep (R-Westminster), prohibits any person, firm, corporation, or association to sell or offer for sale an appointment with the DMV. The penalty is a misdemeanor with a fine of up to $2,500.

“I introduced my first piece of legislation today—AB 317,” said Assemblymember Diep in a statement on Facebook. “This bill will prohibit companies from selling DMV appointments to make a profit.”

Last summer, a company named YoGov started selling services including making faster appointments online and allowing customers to hire someone to wait in line for them at the DMV, as wait times at the DMV rose to an unbearable degree in many areas.

The company charges customers about $25 for securing a DMV appointment within three to four weeks, according to its website.

“Government is supposed to treat everyone equally, regardless of how much they can afford to pay,” said Assemblyman Diep, who believes paying for a government appointment is unfair for people who cannot afford it.

Thank you @TylerDiep for covering important issues for your California constituents esp related to increased access for the middle class – we couldn't agree more!! A special thank you at the end of our recent article for encouraging us to share this 👉 https://t.co/JiNxBz05tT

However, the YoGov claims their customers are not paying for appointments, stating “DMV appointments cannot be individually sold or transferred,” according to the company’s blog.

“In reality, our service is the equivalent to having your receptionist or personal assistant check the DMV website hoping to find a last-minute opening or cancellation for you,” the company states.

In addition, YoGov claims their services are beneficial to the community and save other people time at the DMV.

“We conducted a survey last year that showed that of the general public that visited the DMV, 20% of respondents had to make a 2nd trip to the DMV for the same service,” the company said. “Then, we surveyed our users and found that 97% were able to resolve their DMV needs in a single visit, which is a 17% increase over the general public.”

Starting last summer, a massive increase in applications for Real ID is believed to have caused very long wait times at DMV field offices across the state, with some people waiting hours to get the service. Since then, wait times started to decrease again, according to the Sacramento Bee, but the department convinced the State Legislature to allocate nearly $17 million for the crisis, which was opposed by many Republican lawmakers.

In September 2018, Assemblymember Jim Patterson, who advocated for an audit of the DMV, pointed out that the department had 35 outages in the last 18 months and the longest wait time was nine hours long.

One month later, an independent audit of the DMV was called for after the department admitted that around 1,500 people, including non-citizen individuals, were wrongly registered to vote through the Motor Voter program during the period from April 23 to Sept. 25.

The issue, however, got more serious after then-director Jean Shiomoto revealed that the DMV failed to transmit 589 voter records to elections officials before the November election, which could have prevented those people from voting.

A bombshell report revealed repeated warnings about California’s failed Motor Voter Program were ignored by the man in charge of CA elections. Since then, thousands of voter registration errors have been made. I submitted my audit request Friday. It’s time we know the truth. pic.twitter.com/kJWiUIruzh

Another audit of the department’s Motor Voter program was called for by four Republican Assemblymembers on Feb. 2, one month after Shiomoto resigned.

“The Motor Voter program has had serious and concerning problems since its rollout in April 2018,” stated a letter wrote by Assemblyman Jim Patterson, Vince Fong, Kevin Kiley, and Tom Lackey. “The Department has acknowledged making 105,000 registration errors, including mishandling voter registration information for 23,000 drivers and double-registering as many as 77,000 others.”