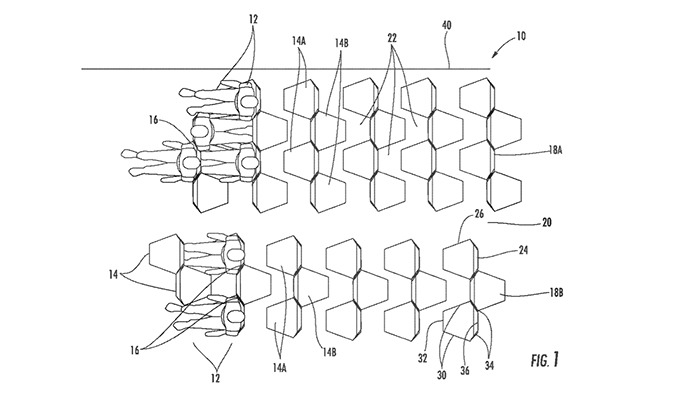 For years, airline seats have been shrinking. The past two decades have seen a decline in the size of airline seats: between 1991 and 2014, the narrowest seats on many major airlines—which are also the most common seats—lost 2 inches in width, or around 10 percent.

When Airbus unveiled its new cabin design in April, it seemed like the bottom of the barrel in terms of seat shrinkage, with the the manufacturer chipping away at the armrests to find space for more seats.

But the innovation of the airliner cabin is far from over.

The design staggers adjacent passengers in the same row in different directions to fit more people in the same amount of space.

Zodiac Seats France, an airplane parts manufacturer, filed a patent for the “Economy Class Hexagon Cabin,” a seating design that ingeniously takes advantage of the simple physical reality that people—at least most of them—are wider at their shoulders than at their hips. The design staggers adjacent passengers in the same row in different directions to fit more people in the same amount of space by allowing shoulder space to overlap.

In a Hexagon” cabin, not only would the seats be larger for any given amount of cabin space, passengers would have full-access to both of their armrests, putting to rest the awkward, passive-aggression territorial disputes familiar to anyone who has flown economy.

The patent is not an outline of a specific blueprint for a cabin, but a general seating pattern that could be modulated to accommodate a variety of airline cabins.

The Hexagon would change not only the seating arrangement, but also make the aisle slightly zig-zagged. To comply with airline regulations about the minimum width needed to constitute an aisle—15 inches at the floor, and 20 inches at a height of 25 inches and higher—some of the seats will be “pivotally mounted,” which would further increase cabin density.

One potential drawback of the Hexagon seating arrangement is that passengers would have a much easier time making—or a much more difficult time avoiding—eye contact with their fellow captives.

Another is that the pattern could require pull-down seats to aid accessibility. Because the seats face each other, it would be difficult for someone in the middle of a row to get out otherwise.

Another potential problem that the Hexagon cabin might pose is that although it would increase the density of passengers in a given cabin, the innovation doesn’t expand the ability of an airplane to store more luggage, particularly in the overhead compartments.

Airliners are already flying much fuller flights than in the past—in 1977, the average flight was 55 percent full, in the 1990s it was 65–70 percent, and it reached a record in 2014 averaging 83.4 full. This coupled with the fact that passengers are bringing bigger carry-ons to avoid paying for checked luggage, puts increasing pressure on storage space.

The Hexagon cabin design, which promises to increase cabin density without sacrificing comfort, could exacerbate that problem meaning more gate checked carry-ons in the future.