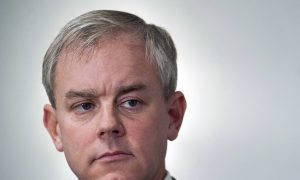 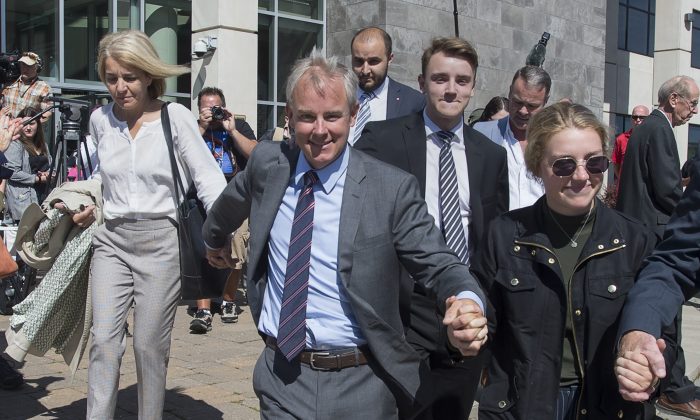 Dennis Oland and family members head from the Law Courts in Saint John, N.B., after he was found not guilty of murdering his father on Friday, July 19, 2019. Justice Terrence Morrison of the New Brunswick Court of Queen’s Bench found Oland not guilty of second degree murder. Richard Oland was beaten to death on July 6, 2011. (Andrew Vaughan/The Canadian Press)
Canada

FREDERICTON—New Brunswick’s Public Prosecution Services announced Tuesday it will not appeal last month’s acquittal of Dennis Oland on a charge of second-degree murder in the 2011 bludgeoning death of his multi-millionaire father, Richard.

Oland, 51, was charged with the killing in 2013 and spent close to a year in prison after being convicted by a jury in 2015. That verdict was overturned on appeal in 2016 and the new trial ordered—this time before judge alone.

In his July 19 decision, Justice Terrence Morrison of the New Brunswick Court of Queen’s Bench said Crown prosecutors failed to prove their case against Oland.

“More than suspicion is needed to convict someone of murder,” the judge said. “In short, I am not satisfied the Crown has proved beyond reasonable doubt that it was Dennis Oland who killed Richard Oland.”

Morrison also said he “cannot accept outright the accused’s denial of guilt.” He said there was much to implicate Oland in the crime, including bloodstains containing his father’s DNA on the jacket he was wearing the day of the killing in Saint John, N.B.

But the presumption of innocence and the need for proof beyond a reasonable doubt are high standards in law, he said, and they were not overcome by prosecutors.

The prosecution services issued a statement Tuesday saying the ultimate aim of any trial must be to seek and ascertain the truth.

“This search for truth is qualified however by other laudable principles upon which our system is based: the presumption of innocence, the principle of reasonable doubt, fair process, the prohibition against double jeopardy, among many,” the statement said. “Public Prosecution Services pursues the truth in every trial and appeal process, but we do so simultaneously as guardians of these equally important principles upon which our system is based.”

It said Justice Morrison’s 146-page decision was closely reviewed before it was determined “there is no basis upon which the Crown can appeal the acquittal of Dennis Oland.”

“It was their only possible decision in law and expected for all the reasons they set out,” Gold said in an email to The Canadian Press.

“Now we hope the police will move forward and actually solve this tragic case.”

Dennis Oland and his family did not make any public comment following the verdict last month. At a news conference the day of the decision, Gold said Dennis Oland’s immediate plans were to decompress from the pressures of the past eight years and spend time with his family.

He said Oland was a victim of police tunnel vision.

The family-owned business, Moosehead Breweries, is based in Saint John, and Richard Oland was a former vice-president until he lost out in a succession dispute and left to run his own enterprises.

Oland was bludgeoned to death sometime during the night of July 6, 2011 in the office of his investment firm Far End Corp. He was struck 45 times with a hammer-like weapon, leaving his skull cracked in several places.

Dennis Oland was the last known person to have seen his father alive.

The police and prosecution theory was that during his visit to the office that day, Dennis Oland used something like a drywall hammer with both a sharp edge and a blunt end to beat his father to death.

During his time on the witness stand, Oland described that theory as “absolutely ridiculous,” saying he is “not that kind of monster.”

One witness, who was working in the office below Oland’s said he heard thumping and banging coming from the floor above around 7:30 or 7:45 p.m.—a time when Dennis Oland was nowhere near the crime scene.

“Justice Morrison, was impacted by the ‘alibi-like’ evidence relating to the ‘guesstimates’ of the time of death of Richard Oland,” Public Prosecution Services says in its statement. “Consequently, his decision erects a complete barrier to an appeal by the Crown.”

Nicole O’Byrne, a law professor at the University of New Brunswick, said while it took eight years for the case to move through the courts, “justice has been served by going through this process.”

She said it’s not uncommon for murder cases to drag on for years.

“The difference with Oland is that there was a lot more media and publicity about this case,” she said. “People are a lot more aware of the twists and turns of the processes that were engaged in this case.”