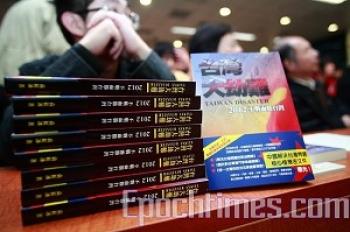 Beijing’s Strategies to Control Taiwan by 2012

TAIPEI, Taiwan—The Chinese communist regime is determined to “unify” with Taiwan by 2012, according to exiled Chinese law professor Yuan Hongbing. He discloses confidential findings in his new book, Taiwan Disaster, which was released on Nov. 17 in Taipei.

In his presentation at National Taiwan University on November 17, Yuan said that a lot of documents quoted in the book were provided by regime insiders—insiders who risked their own lives to reveal the truth.

In his book, Yuan maintains that, through its strategy of unifying the market and financial systems of the mainland with those of Taiwan, Beijing is, at the same time, stepping up its own reunification agenda with its neighbor.

While Taiwan appears to be benefiting from the current economic cooperation with the mainland, in the end Beijing plans to achieve its political endgame of "Unification via the Economy."

In an interview with The Epoch Times, Yuan Hongbing said, "The [global] financial crisis which began in late 2007 resulted from the practice of excessive consumption. It was meant to be an opportunity for mankind to reflect on our worthiness and the true purpose of our lives.

"The Chinese Communist Party (CCP) however, is utilizing [the crisis] to achieve its ultimate goal of enslaving the entire human race—with Taiwan as its first target."

Failing to recognize the dangers

Yuan says it appears that the government of Taiwan has failed to sense the danger. Instead, it is trying to instill a single thought in the minds of the people of Taiwan–a thought he believes to be totally opportunistic in nature.

The misguided thought is that as long as Taiwan works in concert with the CCP, it will narrowly escape the impending global economic catastrophe.

Yuan expressed his serious concerns that Taiwan is compromising its democratic principles under pressure from the regime.

He believes that in the face of the information he has disclosed, the people of Taiwan need to rebuild the spirit and values that are the foundational basis of the Republic of China. Taiwan must rebuild its willpower as a nation if it is to maintain its system of liberty, Yuan asserts. Otherwise, it could become impossible for them to recover their confidence in the future.

Yuan’s main source for his disclosures of the CCP's political agenda presented itself when he was able to obtain a highly classified document—Chinese Prime Minister Wen Jiabao's June 2008 speech given during the expanded meeting of the Political Bureau of the Central Committee of the CCP.

Yuan said the meeting primarily focused on plotting the strategy behind the Taiwan unification plan. The level of confidentiality of the meeting is also notable: the meeting was deep in a cavern in Beijing’s West Mountain—the Central Military Commission's First Strategic Command Center.