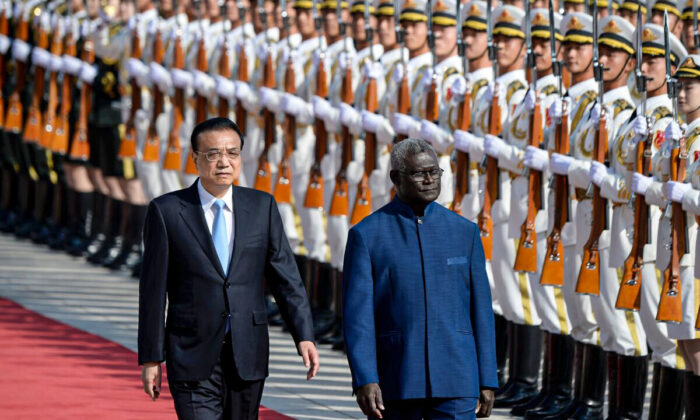 A leaked draft security agreement between Beijing and the Solomon Islands’ will allow Chinese forces to be deployed to the Pacific nation to “protect the safety of Chinese personnel and major projects in Solomon Islands,” putting People’s Liberation Army forces within 1,700 kilometres of Australia’s northern city of Cairns.

The agreement, if carried through, would establish a new forward position for Beijing to assert control over the Indo-Pacific. The Solomons was the site of the Battle of Guadalcanal during World War II and fought over tooth and nail because of its influence over the sea lanes in the region.

The Agreement will need to be implemented by the respective foreign ministries of both governments—for any request for assistance, the Solomon Islands must provide the facilities and border entry for “personnel and weaponry, intelligence and information support.”

The deal also requires details of any assistance to be kept confidential unless both parties agree to release it publicly to the media. The Agreement is set for a five-year period and will be automatically renewed for another five years.

The move deepens an existing divide within the Solomons’ political circles, with Prime Minister Manasseh Sogavare’s deep ties with Beijing at odds with those of provincial leader Daniel Suidani, the premier of Malaita, who has repeatedly refused to follow the national government’s move in rejecting Taiwan—aggravating Sogavare.

“China has moved its frontier 5,000 to within 2,000 miles of the Australian coastline and what the Chinese navy can do with this is really endless,” he told The Epoch Times, noting the new position gave Beijing “surge capability.”

“The Chinese would be offering money, terms, and conditions that the Australian government could not offer,” he added. “So it’s inevitable that large powers offers small powers things they can’t get elsewhere.”

The professor said Beijing would like try to gain access to a deep-water port, and the five year timeframe of the Agreement gave the CCP ample time to build up influence and networks.

“We would be concerned clearly about any military base being established, and we would express that to the Solomon Islands’ government,” he told the Nine Network on March 25. “We want peace and stability in our region, we don’t want pressure and exertion from China to continue to roll out in the region.”

He added that Beijing’s ambitions in the Pacific were not consistent with Australian values in the area.

Australia’s Department of Foreign Affairs and Trade (DFAT) said that Pacific nations should rely on one another to assist with regional security.

“The Pacific family is able to provide security assistance without the need for external support and stand ready to assist further if needed,” a spokesperson told The Epoch Times.

“Pacific Island nations have the right to make sovereign decisions. Australia’s cooperation with our Pacific Family is focused on the economic prosperity, security and development of our region,” he noted, saying Australian assistance was transparent and open.

“We would be concerned by any actions that destabilise the security of our region.”

The release of the documents comes as Beijing has continued to flex its influence in the area following major demonstrations in early December.

For weeks the CCP has helped “train local police” and improve the “anti-riot capabilities” of Solomon Islands’ law enforcement.

Beijing began increasing its “support” of the Islands following the December protests. At the time, Australia, New Zealand, Papua New Guinea, and Fiji also sent troops and police to assist.

However, the latest move will present a number of problems.

The Solomon Islands has an existing agreement with Australia and New Zealand to ask for security assistance if needed, however, the presence of Chinese troops and law enforcement could complicate this arrangement.

Further, the Agreement to allow Chinese military personnel onto the Islands will aggravate ongoing concerns that Beijing will attempt to set up a new forward position for the People’s Liberation Army beyond the South China Sea.

The CCP already had plans to upgrade an airstrip and bridge on the Pacific nation of Kiribati, 3,000 kilometres southwest of Hawaii. Such a facility would make it possible to land larger military aircraft.

It also comes after the U.S.’s Admiral John Aquilino, commander of the U.S. Indo-Pacific Command, warned of the threat posed by Beijing’s three fully militarised bases in the South China Sea.

“Today in the Indo-Pacific, it hosts the most concerning security challenge that we have faced in a number of years,”