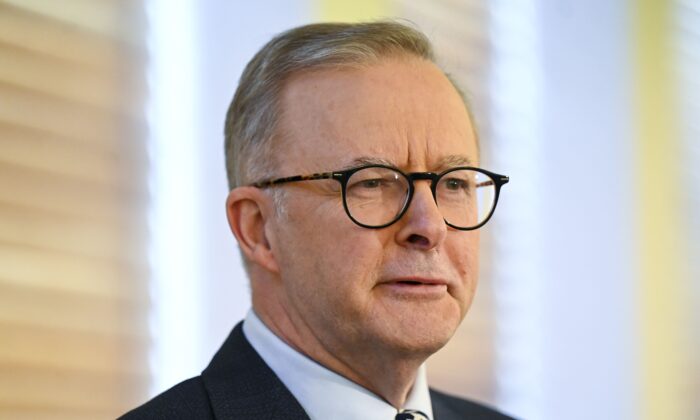 New Australian Prime Minister Anthony Albanese says he wants to see Labor have two terms in government and is calling for the party to be disciplined to ensure it can “entrench” major reforms.

In an address to the Labor Party Caucus, Albanese said the centre-left party needed six years to really lock in major programs in the country, including universal childcare and the renewable energy push.

“I spoke about back-to-back premierships. I spoke about two elections. I said I had two dates in mind,” he told party members on May 31.

Albanese said his goal for the Labor government was that by the time 2025 came around, the party would be able to show progress on achieving cheaper childcare, an end to the “climate wars,” establishing a federal anti-corruption body, a rise in average wages, alleviation of cost of living, affordable housing, and free TAFE.

“We’ll be able to point to that in 2025 because the way you really change the country is to entrench reforms,” he said. “And to do that, you need a long term Labor government.

“It’s only Labor that does the big things in this country.

The new government has already pledged to legislate a new emissions reduction target, lifting it from the previous government’s 26-28 percent target by 2030 to 43 percent.

Albanese said the goals were achievable if the party maintained the discipline it had shown over the past three years in opposition. The Labor Party adopted a “small target” strategy, which meant revealing limited policy detail and sticking tightly to party-approved lines.

The prime minister also said there should be an end to negative politics and “wedge” politics.

“We’re a better country than that. We shouldn’t do that ever.”

Albanese is set to visit Indonesia early next month for a diplomatic visit and will later convene a Jobs Summit to spur economic growth nationally.

Modelled on the Prices and Incomes Accord under the Labor Hawke-Keating government during the 1980s, the Albanese-led Summit will see the government, big business, and unions gather to discuss and develop a national productivity plan.

The plan would, in theory, be implemented and spur productivity in the economy and wage growth—this, in turn, would help Australian workers overcome rising inflation.