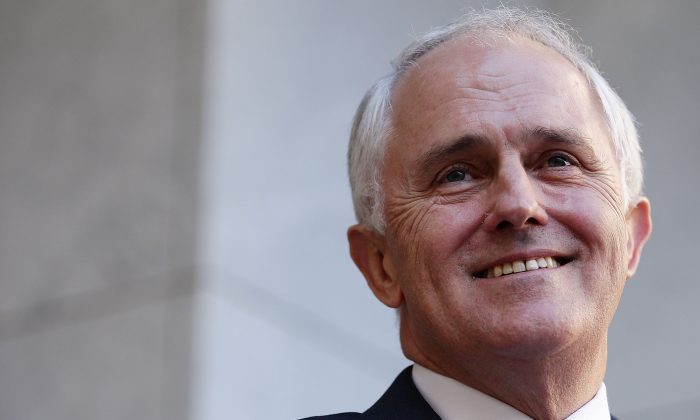 CANBERRA, Australia—Australia’s new Prime Minister Malcom Turnbull indicated on Monday that he is in no hurry to sever the nation’s constitutional links to Britain by appointing an Australian president as head of state.

Turnbull led the Australian Republican Movement when the advocacy group failed at a 1999 referendum to convince Australians to replace Queen Elizabeth II as head of state.

But six days after becoming prime minister, Turnbull said he had no plans to revisit the constitutional issue.

“While I am a republican, I have to say to you that there are much more immediate issues facing me and the government than the republic, and the key ones all relate to economic growth,” Turnbull told Nine Network television.

His team is younger and has more women than the 19-member Cabinet of his predecessor, Tony Abbott.

“Today we are forming a government for the 21st century, a ministry whose composition and focus reflect our determination to ensure that Australia seizes the opportunities of these, the most exciting times in human history,” Turnbull said at the ceremony.

Abbott was defeated in a surprise leadership ballot of Liberal Party lawmakers last week after he battled poor opinion polling during most of his center-right government’s two years in power.

Abbott is a staunch monarchist who riled many conservatives by making the Queen’s husband, Prince Philip, an Australian knight on Australia’s national day on Jan. 26. Many thought an Australian citizen would have been a more appropriate choice for the honor.

Many believe that with both the prime minister and opposition leader Bill Shorten now supporting an Australian republic, the constitutional change could now be possible. Opinion polls suggest that most Australians believe that they should have an Australian head of state.

But Turnbull said there needed to be a “genuine popular movement” for change.

Most Exciting Things to Do in and around Perth, Australia!

“My own view … is that the next occasion for the republic referendum to come up is going to be after the end of the Queen’s reign,” he said. “I think that will be the next watershed event, if you like, to make that issue relevant.”

Abbott was not included in the new Cabinet. The government’s unpopular chief economics minister, Treasurer Joe Hockey, has been replaced by Social Services Minister Scott Morrison. Hockey has announced he plans to quit politics.

Turnbull would not comment on reports that Hockey will become Australia’s next ambassador to the United States.

“I think he’s got a lot of national service, as it were, ahead of him in his life,” Turnbull said.

The government’s popularity crashed in opinion polls and never recovered after Hockey unveiled his first annual budget in May last year. The budget was widely criticized as unfair toward the poor, and a hostile Senate blocked key measures.