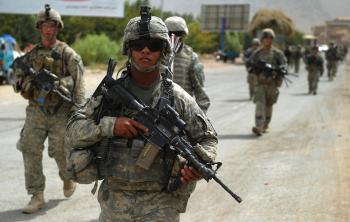 US soldiers patrol jointly with Canadian soldiers and the Afghan National Army in Kandahar's province Arghandab Valley on August 10. Soldiers will now be issued new uniforms that are both fire and flea resistant. (Yuri Cortez/Getty Images)
US

Shaoshao Chen
View profile
Follow
biggersmaller
Print
Soldiers being deployed to Afghanistan will now be issued new uniforms that are both fire and flea resistant.

The MultiCam, as it is called, is patented by Brooklyn-based Crye Precision. The patterns on the uniforms are designed to bend and reflect surrounding colors to better blend in with the environment.

The new uniforms are treated with permethrin, a chemical that protects against insect bites that may transmit diseases such as leishmaniasis and malaria. It is also designed to shield against 70 percent of second degree burns.

According to Crye Precisions, developers of the MultiCam pattern, the design relies on blending effects rather than contrast used in standard camouflage.

The first unit to receive the uniforms is the 2nd Brigade, 34th Infantry Division, at Camp Shelby where over 3,600 soldiers are being outfitted. Soldiers in Afghanistan will start receiving the new uniforms by November or December.