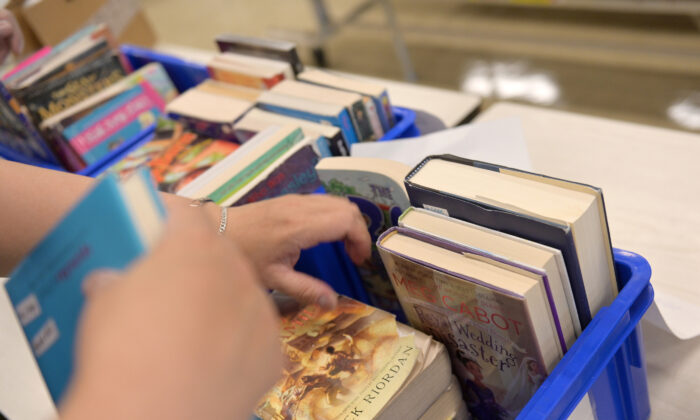 A schoolteacher collects library books from students who just graduated and but borrowed them before schools were shut down at a school in New York City on June 29, 2020. (Michael Loccisano/Getty Images)
US

On April 25, the Arizona House voted 31 Republicans for and 26 Democrats against the passage of HB2439, with three Democrats not voting.

A Senate version of the bill passed 16-12, also along partisan lines, on April 18.

“There was a time when posting grades for every quiz and homework was considered burdensome,” said Arizona Rep. Beverly Pingerelli (R), the bill’s lead sponsor.

“Now, it’s simply the standard, and no one could imagine going backward. In a few years, this too will simply be the standard expectation.”

The new law requires Arizona schools to release to parents lists of books and materials children borrow from the school library.

It also requires schools to post online a list of books available in a school’s library collection and allows a 60-day public review period for new acquisitions beginning in 2023.

At a House Democratic minority caucus hearing on the bill on Feb. 1, Arizona Rep. Jennifer Pawlik (D) said the bill’s passage would be “harmful” to students by limiting access to school library materials.

“We feel that this is going to be harmful to our students. If we have a 60-day waiting period, it’s going to limit books getting into the hands of students.

“In many big districts, parents already have access to the online catalog.”

Arizona Rep. Judy Schwiebert (D), a retired librarian, said it would be “virtually impossible” for school libraries to order materials given “all the hoops they’ll need to jump through to get them approved.”

“We’re already seeing book budgets cut drastically in recent years and a cut in education spending for libraries. This [HB2439] would be harmful to our children in they would not have access to any new materials that they look to their libraries to seek.”

In January, South Carolina parents in the Midlands region voiced outrage after discovering what they saw as pornographic books on school library shelves.

Pingerelli said the new law in Arizona would give parents access to their children’s reading material before it reaches school library shelves.

“There must be a process for parents to know what is in their child’s school library. This law provides basic transparency and openness in education that parents deserve.”