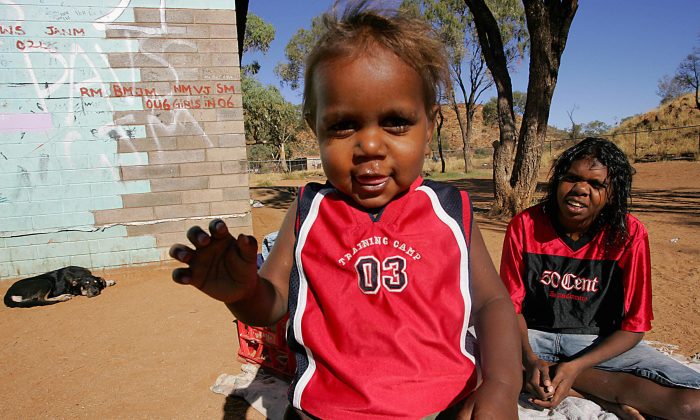 Aboriginal 1 year old child Willy (L) and sister Lucia (R) play at the family's house in camp 'Hidden Valley' which is one of the "town camps" around Alice Springs on May 18, 2007. (ANOEK DE GROOT/AFP/Getty Images)
Australia

Latham warns the gap is getting wider
By Richard Szabo

Mark Latham is proposing that NSW state government funding from the recently established NSW Aboriginal Land Trust could be used to help Aboriginal Australians who want to lift themselves out of poverty by providing relocation, education, job-training and employment subsidies.

“This is the only practical way by which Aboriginal disadvantage can be overcome,” Latham said in a public statement. “One Nation will abolish the failed Aboriginal Land Council system, placing its assets and income stream into a government trust, managed professionally to achieve maximum rates of financial return.”

According to the party website, NSW has the largest Aboriginal population across the nation, with 266,000 or a third of the total. However, Latham believes that there is not enough scrutiny over whether there are any positive results being achieved by the state’s current approach to policy making for the Indigenous community.

“By any objective assessment, the answer is no. Thirty-six years after the passage of the NSW Aboriginal Land Rights Act, Indigenous families are still living in squalor in western districts of the state,” he said. “The recent Census data shows that in places like Moree, Brewarrina, and Bourke, levels of Aboriginal home ownership, personal income, workforce participation, and teenage education are 30 to 50 percent inferior to the non-Aboriginal population.”

“Far from closing, the gap is getting wider,” he said. “Decades of land rights and billions of dollars of government spending have achieved little.”

One Nation's Mark Latham says he wants to see real change with his Aboriginal Rescue Plan. Mark Latham: People talk about closing the gap, but the gap is getting wider in terms of disadvantage.MORE: https://bit.ly/2xVx4jE #Credlin

Latham suggests that moving the vulnerable to places where there are more opportunities could rapidly address the above-average rate of street crime, family violence, drug and alcohol abuse, unemployment, and welfare dependency in these areas.

He believes the left side of politics has seized on Aboriginal suffering since the founding of NSW in 1788 to portray Indigenous people as false victims to serve the leftist agenda.

“The Left are using Aborigines as cannon fodder in their attacks on nationalism and Western civilisation,” he said. “The Indigenous academic Anthony Dillon has pointed out that no Aboriginal actually suffers for things that happened in 1788. It’s too long ago to have a tangible impact on everyday life.”

Latham claims that Aboriginal people today are not necessarily the victims of the explorers James Cook and Arthur Phillip, but rather, they are the victims of poor political policies.

“Indigenous communities have to live with the consequences of public policy failure,” he said. “Leftist hysteria about ‘dispossession’ and ‘genocide’ overlooks a basic statistic: by far the greatest incidence of crimes against Indigenous people is committed by other Indigenous [people]—that is, self-inflicted wounds.”

“NSW One Nation has consulted many Indigenous leaders, especially from the land rights movement, to develop problem-solving policies,” he said. “We are not bothered by so-called sensitivities in this debate. We are only concerned with solutions, with finding commonsense remedies for people who have suffered for too long.”

Since the 1972 rise of the left-leaning Whitlam Labor government, land rights have been touted as the path to spiritually uplifting the Aboriginal community and fostering their economic independence. However, Latham, who is a former Australian Labor Party leader, claims that none of this has actually happened.

Latham said, “As a NSW Indigenous leader puts it, ‘The spiritual side of land rights needs to be questioned. Yes, I feel good when I return to my family’s traditional land but I also feel good when I go to the Gold Coast. Sorry, but anyone who says they genuinely feel connected to land and [that] this defines their existence is having a lend of you.'”

Latham suggests that the land Aborigines have contested for ownership in remote parts of the state are part of the problem since they are place where there are high levels of Indigenous suffering and squalor.

“They don’t provide jobs and financial self-sufficiency,” he said. “Instead, locking Aborigines into remaining at places that have no hope of future economic development. The location itself is the problem.”

Microsoft founder Bill Gates previously visited remote parts of Australia and would not invest at all, Latham said.

“What hope is there for poor people living in humpies?” Latham said. “The land rights movement has encouraged Aboriginal people to remain in uneconomic locations, adding to their misery. It has allowed the Left to believe it has done something positive for ‘social justice,’ easing their conscience, when in reality, the opposite is true.”

“The level of disadvantage rises exponentially,” he said. “These communities lack role models for work and enterprise, falling into a cycle of inter-generational welfare.”

He believes the most feasible solution is to move to places where they have a chance of gaining an education and finding work.

“Unviable communities need to be closed down,” he said. “Financial returns on land rights assets would be better spent on relocation subsidies, educational scholarships, and job-training and employment support.”