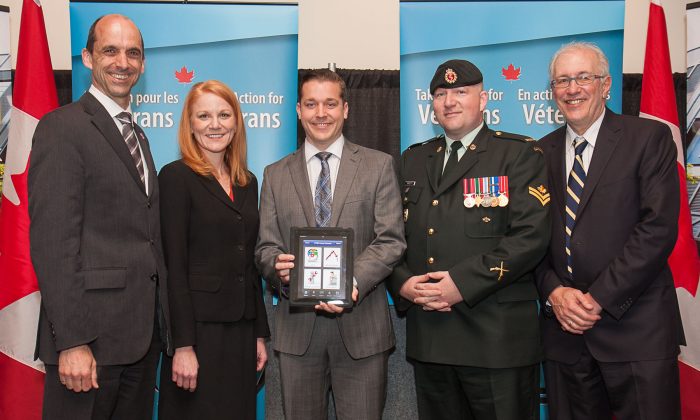 “Our Government recognizes the seriousness of PTSD among veterans and Canadian Armed Forces personnel and its impact on their families, and is committed to supporting them,” said Blaney in a statement.

“As Mental Health Week begins in Canada, I am proud to support these important initiatives which will assist us in addressing the mental health needs of those who sacrificed so much for their country.”

The free app, which was adapted from an American version created by the U.S. Dept. of Veterans Affairs and Dept. of Defence, will provide users with information on PTSD, self-assessment tools, and information about professional health care resources and support services.

The app can be downloaded to mobile devices through the iTunes store and Android Market, and includes tools to help users manage day-to-day symptoms and stress.

The app was developed as a Ryerson University research project in collaboration with Veterans Affairs Canada, the Department of National Defence and the Canadian Mental Health Association, and Candice Monson, a psychology professor at Ryerson.

“This project provides an opportunity for collaboration with key research partners. We are looking forward to seeing how these results benefit those who suffer from post-traumatic stress disorder,” said Sheldon Levy, Ryerson University president and vice-chancellor.

The announcement comes as federal funding for veteran’s services continues to plummet in recent years. Veterans Affairs Canada plans to cut more than $226 million from its budget by 2014, according to government documents. Compensation and financial support for former soldiers are expected to face the biggest cuts.

Veteran Tim Laidler, executive director of the Veterans Transition Network, said innovations such as the new app “are welcome and helpful additions in the fight against PTSD among veterans.”

“The task of supporting Canadian Veterans dealing with barriers to transition like post-traumatic stress disorder is complex and requires numerous layers of assistance.”

On behalf of the Canadian Institutes of Health Research (CIHR), Blaney also announced Monday that $375,755 will be allocated for a two-year study involving 140 clinicians to examine how effectively they are using cognitive processing therapy to treat adults with PTSD.

“Post-traumatic stress disorder is one of the most treatable mental health conditions, which affects about 10 percent of Canadians,” said Monson, principal investigator of the CIHR study.

“We believe that using cognitive processing therapy to treat individuals with PTSD will significantly improve the lives of Canadians. Our study hopes to prove this by training clinicians on this form of therapy and monitoring its benefits for patients who have received this short-term psychological treatment.”