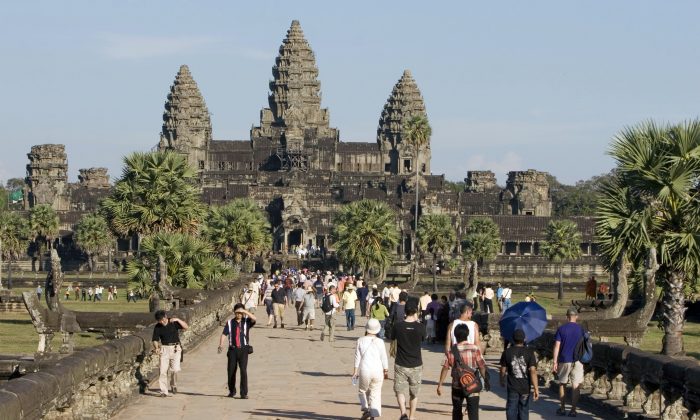 Archaeologists have announced new details discovered about the temple of Angkor Wat as the government announced new rules for tourists visiting the site.

A recent video from the Cambodian government says visitors will have to abide by new rules that were recently announced through posters placed around the site, which hosts more than 2 million visitors a year.

People are not allowed to smoke at all at the site, nor give money or candy to begging children, the government said.

Taking selfies with monks is also forbidden unless they give permission.

Another new rule targets a recent practice of foreigners stripping naked at the World Heritage site.

“No revealing clothes,” is that rule. As has been the case in the past, people who break the rules will be arrested.

The good news is that the site will open two hours earlier, at 5:30 a.m., starting January 1.

Meanwhile, University of Sydney researchers said on December 9 that the site was much larger and more complex than previously thought in results published in the journal Antiquity.

The researchers, who are utilizing airborne laser scanning, ground-penetrating radar, and targeted excavation to map the pre-industrial temple, say their research includes the new discovery of a unique structure that is the southern boundary to the updated picture of the complex.

“This structure, which has dimensions of more than 1500m×600m, is the most striking discovery associated with Angkor Wat to date. Its function remains unknown and, as yet, it has no known equivalent in the Angkorian world,” said professor Roland Fletcher, from the university’s Department of Archaeology, in the announcement.

Besides also finding a number of remains of buried towers, the researchers have also found evidence of low-density residential occupation in the region, including a grid of roads, ponds, and mounds.

“This challenges our traditional understanding of the social hierarchy of the Angkor Wat community and shows that the temple precinct, bounded by moat and wall, may not have been exclusively the preserve of the wealthy or the priestly elite,” said Dr Fletcher.

The third piece of the new research is the discovery that Angkor Wat was fortified with wooden structures sometime late in its history between AD 1585, indicating that the people at the complex made one last attempt at its defense.