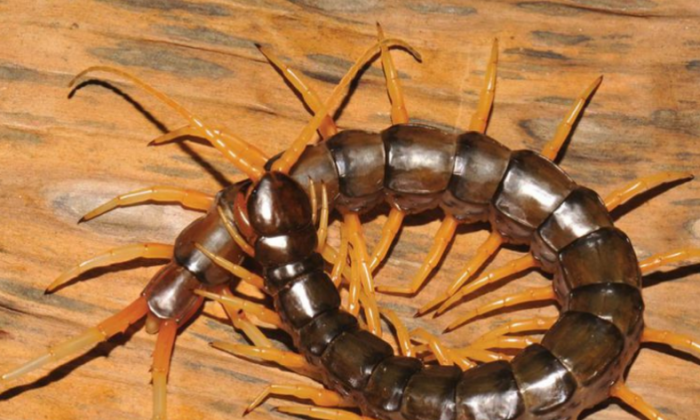 A giant, swimming, and venomous centipede has been discovered in Thailand.

Entomologist George Beccaloni said he discovered the waterborne centipede—part of the “Scolopendra” species group of giant centipedes that can grow to nearly 8 inches long—in 2001 during his Thai honeymoon, but it was only recently fully described in the online journal ZooKeys.

“Wherever I go in the world, I always turn over rocks beside streams, and that’s where I found this centipede, which was quite a surprise,” Beccaloni was quoted by National Geographic as saying.

“It was pretty horrific-looking: very big with long legs and a horrible dark, greenish-black color,” he elaborated.

When the centipede was spotted, it bolted into a nearby stream, running along the bottom before concealing itself under a rock, he said. Beccaloni captured the centipede and placed it in a container of water. It then swam to the bottom of the container like an eel, he noted. When he removed it from the container, he noticed “the water rolled off its body, leaving it totally dry.”

He brought the centipede to the Natural History Museum in London, but an expert was skeptical, as Scolopendra are a dry-habitat species, and there were no known species of amphibious centipede. The specimen then sat in the museum’s collection for years, according to National Geographic.

“I would bet this species goes into the water at night to hunt aquatic or amphibious invertebrates,” Beccaloni said.

The centipede has a painful bite as well. “All large Scolopendra can deliver a painful bite, the ‘fang’ of the venom-delivery system being able to pierce our skin,” Beccaloni’s colleague, Gregory Edgecombe, told the publication.

His colleagues found two more centipedes in Laos, and DNA testing was carried out to confirm it was a new species of centipede, according to ZooKeys.