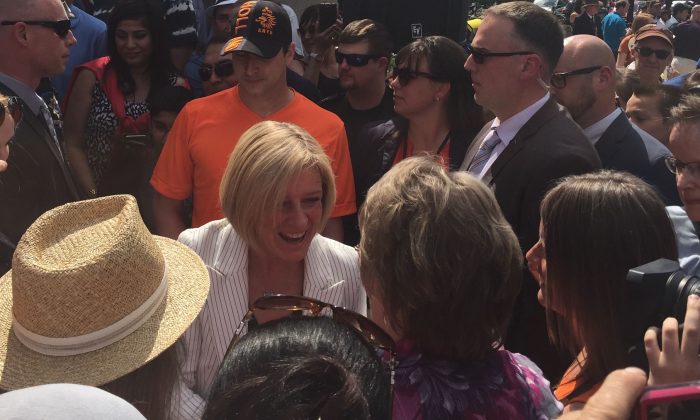 New Alberta Premier Rachel Notley (C) greets supporters at the Alberta Legislature Grounds on May 24, 2015, following the swearing-in ceremony of the new premier and her cabinet. (Omid Ghoreishi/Epoch Times)
Canada

EDMONTON—Thousands of people gathered on the grounds of the Alberta Legislature in Edmonton for the swearing-in ceremony of the province’s new NDP Premier Rachel Notley and her cabinet on May 24.

“My friends, it is springtime in Alberta and a fresh wind is blowing,” Notley said in her speech to roaring applause, hinting at the end of 44 years of Progressive Conservative government in the province.

“To harvest its potential, the hard work begins today.”

Notley and her small cabinet, totalling 12 including herself, took the oath of office from Alberta Chief Justice Catherine Fraser, who presided over the ceremony.

Longtime former NDP leader Brian Mason, a former Edmonton city councillor and one of only four NDP MLAs before the early May election that granted the party a 54-seat majority, was given the infrastructure and transportation portfolio. He will also serve as the government house leader.

My friends, it is springtime in Alberta and a fresh wind is blowing.
— Premier Rachel Notley

“It’s wonderful. I’m thrilled to see so many people. I thought that we were at a maximum number when we had the candle light vigil for Jack Layton, and there was about 5,000 people there that day. But there’s much more here,” Mason told Epoch Times.

Alberta’s new finance minister, Joe Ceci, a former Calgary Alderman and one of the three Calgarians on the cabinet, said the fact that the ceremony was held outdoors made it a celebration with all Albertans.

“This was tremendous,” he said.

In addition to serving as the premier, Notley will also be the international and intergovernmental relations minister.

Sarah Hoffman, who previously was the chair of the Edmonton Public School Board, will be the new minister of health and seniors.

Lori Sigurdson, a former social worker and university instructor, will be the minister of innovation and advanced education, jobs, skills training, and labour. Oneil Carlier, a former union representative, will serve as the minister of agriculture and forestry.

In all, half of the new cabinet members are from Edmonton, three from Calgary, one from Lethbridge, and two from northern rural ridings.

Hoffman, one of the better-known new NDP MLAs, said people can expect the NDP government to deliver on the platform it campaigned on.

Former NDP MLA and party leader Raj Pannu, who used to lead the party from 2000 to 2004, said an NDP government in Alberta was long overdue. But he had some advice for the new government.

“Take your time, be thoughtful, but move forward,” Pannu said.

“There has been a government in power for 44 years, and you need to understand how things look like from the inside before you move forward.”

“You don’t want to cause a major shift, because it could really shock the entire province. We have to gradually change and move it forward with policies,” said Sucha, 28, a former restaurant manager.

“It’s going to be a funny comparison, but it’s like that movie ‘What about Bob’: baby steps, as you do everything. We have to make sure that we gradually change everything. It takes time to improve and change our government systems as well.”