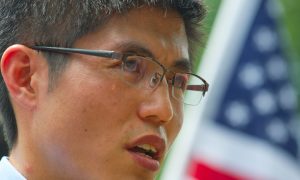 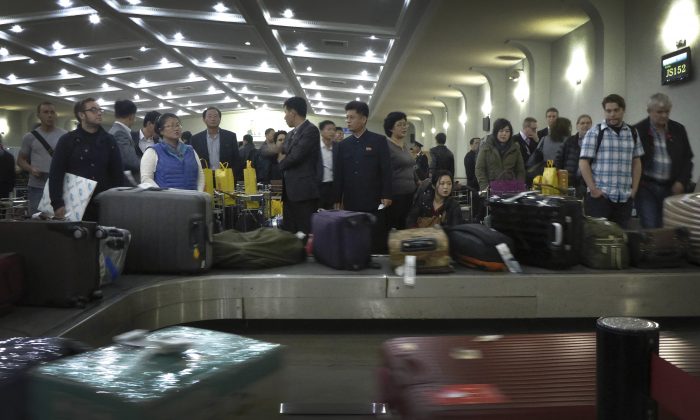 FILE - In this Oct. 21, 2014 file photo, passengers wait for their luggage upon arrival at the Sunan International Airport in Pyongyang, North Korea before closing its door for foreign visitors to visit the country in fear of the Ebola virus. North Korea, never a country to take the threat of foreign invasion lightly, has been under virtual lockdown since October to keep the Ebola virus from crossing its borders. But two leading travel agencies that specialize in the small but growing North Korea market say they have confirmed the North may be ready to open up its doors again soon. (AP Photo/Wong Maye-E, File)
Asia & Pacific

PYONGYANG, North Korea—Pyongyang’s shiny new airport building has all the features international travelers have come to expect, though some lose their luster upon closer examination. Case in point: Its Internet room appears to be missing the Internet.

On two recent trips through the airport by The Associated Press, the room’s three terminals were either occupied by North Korean airport employees, making it impossible for others to use them, or were completely empty, with their keyboards removed. Attempts to open any browser with a mouse resulted in a failure to connect.

North Korea Warns of War With South After Artillery Fire

Maybe it was a temporary glitch. It’s hard to say, since airport officials have refused to comment to the AP.

But a quick check of the history on two of the terminals showed one was either empty or had been cleared, and the other had a record only of a visit to Naenara, the North’s official website.

At first glance, Internet at the airport would seem like quite a concession for a country that is almost completely sealed off from the World Wide Web.

Hardly any North Koreans have personal-use computers and most of those with online access can see only the country’s domestic version of the Web — an intranet that has only websites that are sanctioned by the government and is for internal use only.

The Internet itself can be seen only by a small number of elites, IT experts or others with a clear need to use it, and always under close supervision.

The Internet room at the airport, which opened a few months ago, is just part of efforts there to give visitors the sense that North Korea is just like any other modern travel destination.

Arriving passengers see coffee and well-stocked souvenir shops, a DVD stand, information desk and a slickly produced billboard showing a crew of the nation’s flag-carrier, Air Koryo, looking sharp in their blue and red uniforms. There are even two chocolate fountains, one for white chocolate and the other for dark.

Another nod to international norms can be seen right behind the Internet room, in the smoking room.

In something almost never seen in the North, where just about every adult male who can afford it, including leader Kim Jong Un, is a smoker, the room has a big sign warning that the habit is hazardous to one’s health.