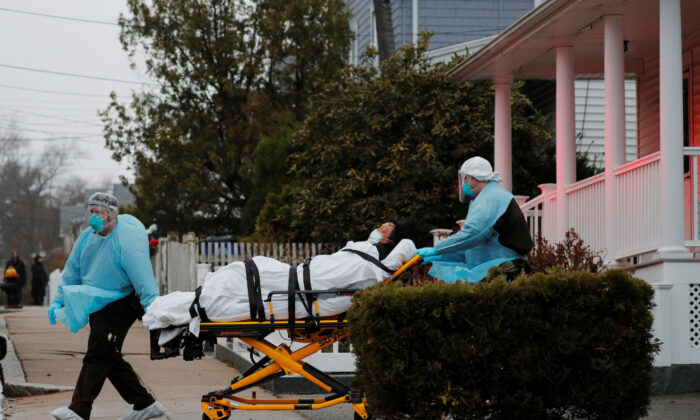 ‘Never Had a Chance’: More Than 80 Dead From CCP Virus at Home for Veterans

The CCP virus has killed around 80 veterans at a care facility in Massachusetts, becoming one of the deadliest outbreaks at a long-term care facility anywhere in the world, according to authorities.

Massachusetts health authorities told local station WWLP that 80 veterans have died from the CCP (Chinese Communist Party) virus, a novel coronavirus that causes COVID-19, at the Holyoke Soldiers Home as of Tuesday.

The state has since taken over operations of the health care facility after its superintendent, Bennet Walsh, was placed on paid administrative leave.

“It’s horrific,” said Edward Lapointe, whose father-in-law lives there and contracted a mild case of the CCP virus. “These guys never had a chance,” he added, according to the Boston Globe.

Several employees at the home said they believe the facility placed the veterans in harm’s way during the pandemic.

“What kind of a system is this? We’re talking about 21st century United States of America,” said Kwesi Ablordeppe, a longtime certified nurse aide who worked there, according to WCVB. “We’re talking about the veterans who put their lives on the line to save us, okay. And is that how we’re going to treat them?”

Ablordeppe added that he works “on the COVID floor” of the Soldiers Home. “And as soon as I walked into the unit, I broke down.”

Joan Miller, a nurse at the home, told the Globe that an entire unit was closed down because there weren’t enough workers to run it, forcing some veterans to get into close proximity to those who were infected.

“Veterans were on top of each other. We didn’t know who was positive and who was negative and then they grouped people together and that really exacerbated it even more,” said Miller. “That’s when it really blew up.”

Massachusetts Gov. Charlie Baker has said he wasn’t aware of the outbreak at the home until March 29 when several veterans there had died from the virus. But he said he was “appalled” by the lack of reporting from the facility to the state, reported the Boston Globe.

The National Guard was then deployed, and Walsh was placed on administrative leave, according to Baker.

One of the best ways to prevent spread of the virus is washing your hands with soap and water. The U.S. Centers for Disease Control and Prevention recommends first washing with warm or cold water and then lathering soap for 20 seconds to get it on the backs of hands, between fingers and under fingernails before rinsing off.