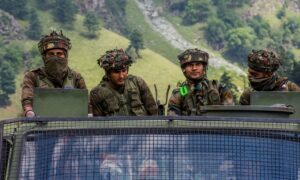 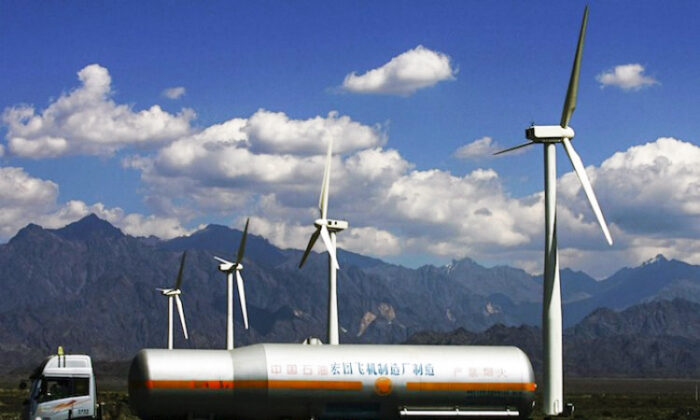 An oil truck driving past wind turbines at the Dafancheng Wind Power Plant, the largest of its kind in Aisa, in 2007 in Dafancheng of Xinjiang Uygur Autonomous Region, China. (China Photos/Getty Images)
Chinese Regime

‘There Are Checkpoints at Every Corner’: Chinese Trucker Describes Expansive Surveillance System in Xinjiang

A Chinese fuel tank truck driver described his experience in delivering fuel to Xinjiang as a “life-time hardship.” He vowed, “Regardless, I will never go to Xinjiang again.”

Lu Ming (pseudonym) is a truck driver from Shandong, a coastal province in eastern China. In a recent interview with the Epoch Times, he recounted his trip to a Xinjiang military base.

“When you enter Xinjiang, there are checkpoints at every corner. Armed police are stationed in every school, governmental unit, and gate.” Lu said.

He described how every gas station is encircled by a barbed-wire fence like a prison, and people need to swipe their ID cards to buy gas.

In the northwest region of Xinjiang, the Chinese communist regime has enacted a vast system of repression and surveillance directed at the region’s ethnic Turkic Muslim inhabitants, in what the United States and other Western countries have labeled a genocide.

More than one million Uyghurs and other Muslim minorities have been detained in a network of internment camps, while those outside the camps are subjected to near-total surveillance carried out through an array of checkpoints, CCTV cameras, and police monitoring.

In mid-June, Lu left Shandong with a tank of diesel heading for Xinjiang.

Meanwhile, his cellphone was already traced and tagged with an asterisk by Chinese officials because of his earlier trip to Wenzhou, where the CCP (Chinese Communist Party) virus, commonly known as the novel coronavirus surged after he left. It will take 14 days for the asterisk to be canceled.

Beijing adopted the “itinerary code” big data system as a measure to contain the CCP virus. The asterisk indicates that there are medium-risk or high-risk areas in the city that the cell phone owner has visited in the past 14 days, but does not mean that the owner actually visited the medium- and high-risk areas.

Therefore, this mark followed him all the way to Xinjiang.

On his way to Yecheng (bordering Pakistan and India), southwest of Xinjiang, the police followed him the entire way.

He explained that after he entered Xinjiang, the police sealed the door of his truck. He was not allowed to leave the truck, eat, or drink. When he reached the next county, the police would hand all documents to the officers there. “I had to go through the ID check, the QR code scanning, etc., at every checkpoint…I was led from one county to another,” Lu said.

“You would have to go to the restroom somehow, right? But, you have to hold it. When I really couldn’t hold back anymore, I honked the horn at the police car following me. When we drove to the service area, he’d remove the door seal. They sealed it back on after you’re done.” Lu said.

When entering the Yecheng County border, he had to go to the Yecheng service area and have another nucleic acid test.

Lu said, “No other vehicles can come close to my truck. A special person did the nucleic acid test for me…I had to drive to the parking lot of the service area and spend a night there. I was not allowed to leave until the test result came out the next day.”

After the test, Lu had to go through a seven-day quarantine, on the truck, before continuing his trip.

Lu was again escorted all the way until he was out of the area. After he entered the mountainous area, he was finally left alone for the remaining 250-mile drive.

Lu said that he was delivering the diesel fuel to the place where the Sino-Indian border conflict took place, and the troops stationed there are ready to set up a military base.

The military site was heavily guarded by police and soldiers.

“Another one to two mile[s] ahead of the fuel depot is covered with minefields.” Lu said.

He was told not to worry about unloading, and warned not to take photos or videos.

After unloading the fuel, it was July 1 and the regime was celebrating the Communist Party centenary. Xinjiang would not allow dangerous goods vehicles to leave the region. Lu was quarantined in the mountain area for three days.

Lu said, in addition to the two days he lost before and after the quarantine in Yecheng, “I was quarantined for a total of 12 days.”