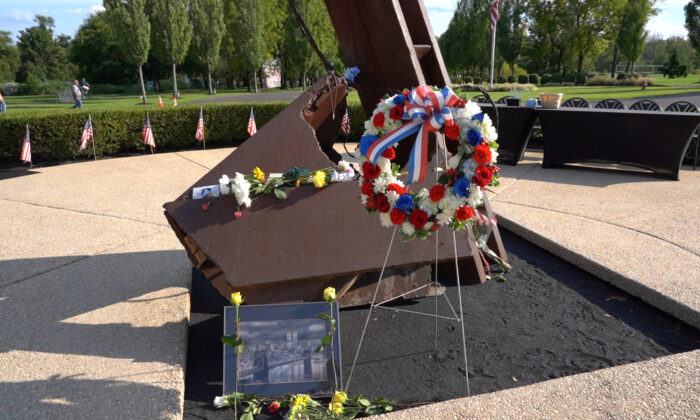 LOWER MAKEFIELD TOWNSHIP, Pa.—On Sept. 11, 2021, hundreds of people gathered at the Garden of Reflection in Lower Makefield Township, Bucks County, Pennsylvania, to remember those who lost their lives on that day 20 years ago.

Eighteen residents of Bucks County and nine from Lower Makefield Township were lost during the 9/11 terrorist attacks, the highest losses throughout Pennsylvania. The spirit of America—patriotism—has brought the families and supporters of these victims back together 20 years later, as demonstrated during the ceremony.

Reiss gave a speech at the morning ceremony and mentioned the dark and sad day 20 years ago, “It’s difficult to believe that 20 years have passed since our lives were irrevocably changed forever.” She recalled the last words her son spoke to her on the night of Sept. 10, 2001, “You know, I love you guys.”

When all the victims’ relatives finally accepted the inevitable fact that their loved ones were gone, she said they knew they needed to “begin a new normal.” It took a long time for her. Despite this, Reiss finally decided to do what “I knew Josh would want.” In her son’s case, she says, it meant revenge. But for her, the best revenge is “to live a good and purposeful life. And no terrorist can ever defeat that.” Reiss urged people to each day “do one good and purposeful thing, because that is the American spirit.”

She had been inundated with texts, emails, and phone calls from many supporters in the past few weeks, including her high school classmates and even Joshua’s elementary school friends who texted her the night before Sept. 11 to share stories about her son.

Reiss singled out her friend, the late Grace Godshalk, a former Lower Makefield Township supervisor who lost her son, William Godshalk, in the attack. Godshalk helped Reiss and other local families establish the Garden of Reflection, which became Pennsylvania’s official state 9/11 Memorial. Although Reiss is a “sort of liberal Democrat” and Godshalk was a “old Yankee Republican,” the 9/11 attacks brought them closer together, caring for and supporting each other.

“As you live and enjoy the breaths you take today and tonight and before you go to sleep in preparation for your life tomorrow, kiss the ones you love, snuggle a little closer, and never take one second of your life for granted,” Reiss said, quoting from an unknown source.

Many of those who attended Saturday’s ceremony remembered how patriotic people were after the event of 9/11.

“Everybody gave a hand and lended their support and not for just the firefighters and police and EMS, but the residents of New York City,” Eric Woodring, the Deputy Chief at Warrington Fire Company told The Epoch Times.

Woodring said Sept. 11, 20 years ago, was a very emotional day for any firefighter throughout the country, because 343 New York City firefighters lost their lives on that day. “I remember the day very vividly, watching what was happening that day … knowing the duties and jobs of the FDNY (New York City Fire Department) and what they were going into.”

As a fireman, Woodring said he doesn’t think he knows any firemen that wouldn’t have done the same because “that’s what our job is.” “We’re trained to do it, and it’s just an instinct,” he added.

Woodring would like to see people’s passion for patriotism come back again and to help each other at all times, just not in situations like a terrorist attack. “It would be nice to see some of that back again … and have that sense of pride in our nation.”

Others also pointed out how important patriotism is to this country, especially in uncertain times.

Tom Maddock and his wife, Bunkie Maddock, are retired now and previously worked as historical interpreters at Washington Crossing Historic Park. Thinking back to the 9/11 attacks 20 years ago, Tom Maddock still remembers them vividly. He was on a bus going into New York when the first plane hit and was in New York when the second plane hit. “I was there, seeing all the smoke and all the damage and stuff like that,” he told The Epoch Times. “And it’s just something that as patriots, you just don’t want ever to forget.”

Tom said that he sincerely hopes the event will stir up patriotism in people, “I think the country needs a huge dose of patriotism.”

Jim Jones is a rider for Warriors’ Watch Riders, a military support organization whose mission is to support military personnel and their families. “I read a post this morning that said about the best day was Sept. 12 when Americans were more gathered; everybody was going out buying flags,” Jones told The Epoch Times. “There were just more patriots then, and that’s what we need to get back to.”

Jones thought the significance of such an event for future generations is to “never forget.” He hopes the country now can become safer. “Hopefully soon we can go in the right direction and become a stronger, competent country than we are,” he said.