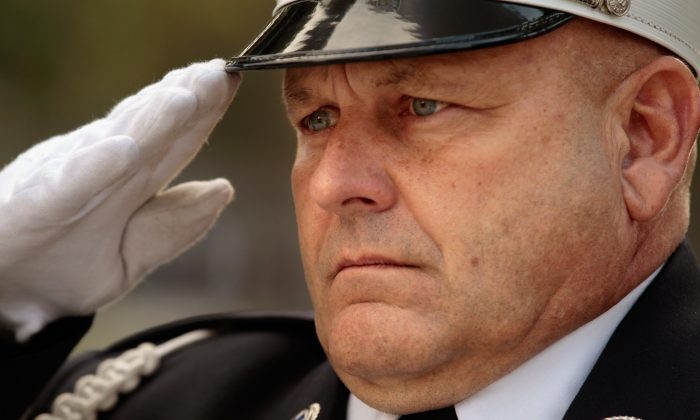 A New York Fire Department firefighter salutes during the singing of the Star Spangled Banner at one of the entrances of 9/11 Memorial Plaza during the tenth anniversary ceremonies of the Sept. 11, 2001 terrorist attacks at the World Trade Center site, Sept. 11, 2011 in New York City. (Chip Somodevilla/Getty Images)
Viewpoints

On Saturday, May 5, I visited the stunning 9/11 Memorial Plaza at Eagle Rock Reservation in West Orange, New Jersey.

This memorial plaza, with a majestic view of the New York City skyline, honors all who lost their lives on 9/11, and all who served.

The names of all who perished at the World Trade Center, Pentagon, and on the planes are engraved here. It is a sacred place that inspires the soul to reverently pause, reflect, and remember a day that changed America.

The plaza has a special meaning for thousands who made their way here on Sept. 11, 2001 to witness the shocking events unfolding at the World Trade Center.

From this vantage point in Essex County, the fiery towers and their collapse were clearly viewed.

Since 9/11 the plaza has become a gathering place to grieve, reflect, and honor the fallen. It is also a place to remember the countless acts of heroism by those who responded to the tragedy.

The Wall of Remembrance, with 3,000 engraved names of those who perished, is the largest element of the plaza.

Yet, there are also other elements including the Book of Remembrance monument. This monument honors the 58 people from Essex County who lost their lives.

There is also an 8-foot bronze freedom eagle, and a bronze sculpture of a young child called Gabriella. This sculpture of Gabriella holding her teddy-bear represents more than 1,000 children who lost a parent or family member.

In addition, a bronze plaque pays tribute to the emergency medical services personnel who responded to the tragedy.

The plaza also has a simple granite pedestal with a bronzed pilot hat listing the names of the 33 flight crew members from the four planes who perished.

Along with these various memorial elements, there is a bronzed NYPD cap. This bronze cap on a granite pedestal honors the 37 NYPD officers, 37 Port Authority Police Department officers, and emergency services personnel who sacrificed their lives in the line of duty on 9/11.

The NYPD cap caught my attention since I was aware of the upcoming National Police Week.

During National Police Week fallen police officers are honored and this year would be the 30th Annual Candlelight Vigil. The event will take place on May 13 at the National Law Enforcement Officers Memorial Wall (NLEOMW) in Washington, DC.

This year, the names of 360 officers will be added to the NLEOMW. This includes 129 who made the ultimate sacrifice in 2017, in addition to 231 law enforcement personnel who died earlier, but whose sacrifices were not previously documented.

With the additional engraved names, there are now 25,541 names on the memorial. These represent the fallen from all 50 states, the District of Columbia, U.S. territories, federal law enforcement, and military agencies.

The NLEOMW features two curving 304-foot-long marble walls with names dating back to the first known death in 1791.

Yet, unlike many other Washington DC memorials, this one is constantly changing. The names of additional fallen officers are engraved each spring, prior to National Police Week.

At the pathway entrance to the memorial are bronze statues of adult lions protecting their cubs.

The lions symbolize strength, courage, and valor. These are hallmarks of those who take the solemn oath to protect and serve their communities.

Each and every fallen officer deserves eternal honor. To remind us of the dangers of their vocation, here are some of the most recent as memorialized by the National Law Enforcement Officers Memorial Fund.

Deputy Sheriff Gentry was shot on May 6, 2018, as he responded to an animal abuse case. As Deputy Gentry stood at the front door, the suspect opened fire and Deputy Gentry succumbed to his injuries the following day.

Agent Joel Alexis Pantojas-Fuente was struck and killed as he assisted a disabled motorist.

Police Officer Rob Pitts was shot and killed while conducting a homicide investigation. Officer Pitts and several other officers were fired upon when they approached an apartment complex to confront a suspect believed to be involved in the homicide.

Police Officer Jesus Cordova was shot and killed while attempting to apprehend a carjacking suspect.

Corporal Eugene Cole was shot and killed while in Norridgewock, Maine. The suspect stole Corporal Cole’s marked police cruiser and committed a robbery at a Maine convenience store.

Police Officer Sean Gannon was shot and killed while assisting with serving a warrant. Officer Gannon and his canine partner were searching the home and located the suspect when he was struck by gunfire.

Veteran Officer Keith Earle died as a result of injuries sustained in an on-duty crash that occurred on March 26, 2018.

Police Officer Greggory Casillas was shot and killed as he attempted to arrest a man following a vehicle pursuit.

All of our fallen officers who made the ultimate sacrifice protecting our communities deserve perpetual respect, honor, and dignity.

Yet, their memory must be engraved not only on stone.

Each of these brave souls must have their names eternally engraved in our hearts as they represent the courage, character, and decency of America.