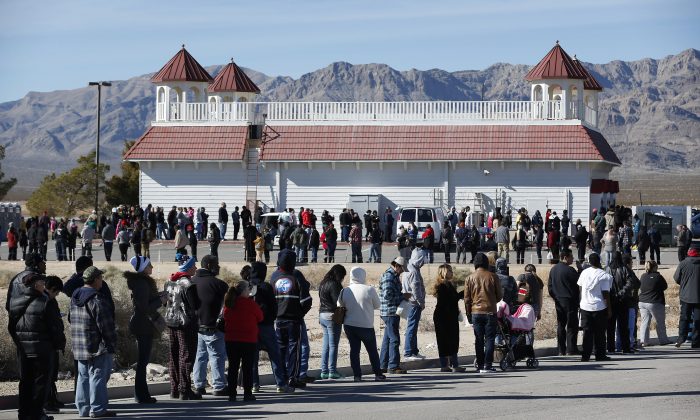 Patrons line up to buy Powerball lottery tickets outside the Primm Valley Casino Resorts Lotto Store just inside the California border Tuesday, Jan. 12, 2016, near Primm, Nev. The Powerball jackpot has grown to over 1 billion dollars for the next drawing on Wednesday. (AP Photo/John Locher)
US

Nevadans Long for Lotto, the Bit of Gambling They Can’t Have

NIPTON, Calif.—Waiting in a long, winding line outside what officials call the busiest lottery store in the nation, 74-year-old William Burke had three hours to think about what he’ll do if he wins a multistate Powerball jackpot estimated at $1.5 billion.

“I’d certainly take care of my family,” the Nevada resident said as he emerged from the store in Nipton, California, just over the state line. “But I would also set up a charity to help as many kids go to college as I could.”

Forty miles from Las Vegas, the Primm Valley Lotto Store where Burke bought tickets Monday swarmed with hundreds of dreamers — many of them refugees from the lottery-less Nevada. The state that features slots in almost every grocery store, airport and bar is one of six that shuns the lottery, fearing it would undercut the dominant casino industry.

“We have a lot of problems in this state. We’re high on a lot of the bad lists,” said Democratic Assemblyman James Ohrenschall, who co-sponsored the latest failed attempt to repeal Nevada’s constitutional lottery ban. “We can’t afford to be exporting money that could be used to address these issues.”

But Nevada’s political climate makes a lottery a tough sell. The state’s casino-based tourism industry accounts for 28 percent of Nevada’s total workforce, pays taxes that make up 45 percent of state general fund revenues, and is a major contributor to political campaigns.

“Our gaming industry throughout the state provides a significant amount of tax money for the education of our children,” said Republican Nevada Assemblyman Lynn Stewart, who chaired the committee where the latest attempt to start a lottery died with a whimper last year. “I think we need to realize who our golden goose is.”

So business keeps booming for border town vendors such as Rosie’s Den Cafe in Arizona, 60 miles from Las Vegas.

“I’m sure glad mom had the foresight to get the lottery 27 years ago,” store owner Brad Larson said of his late mother, Rosie Larson. “The terminals are running nonstop.”

While competition concerns prevent the lottery in Nevada, religious beliefs have posed a barrier in Alabama, Mississippi and Utah. Alaska has been more concerned that a lottery wouldn’t pay off in such a sparsely populated state. In Hawaii, lawmakers have proposed lottery measures, but the idea always fails.

The Multi-State Lottery Association, which runs Powerball, reports that some of the biggest ticket sales come from border cities. That means residents of one state are driving to another to play Powerball, then probably spending a bit more on gas, soda or doughnuts.

“What that means for policymakers, that’s their business,” said Gary Grief, executive director of the Texas Lottery. “I’m sure they’re watching those dollars flow out of their state.”

In Alabama, people have been talking about instituting a lottery for years, in part because of sales in border states. Faced with tight state budgets and demands from voters, Republicans and Democrats on Tuesday introduced rival lottery bills for the legislative session that begins in February.

Republican state Sen. Jim McClendon, one of the bill sponsors, said this month’s Powerball mania highlights the huge number of Alabama residents who are driving to surrounding states for tickets and “cannot understand why Alabama doesn’t offer what 44 other states in America offer.”

Mississippi state Rep. Alyce Clarke, a Democrat from Jackson, has repeatedly sponsored a lottery bill, but she said religious opposition always kills the idea. That could change this year because of Powerball, she explained, enabling the state to raise money to subsidize colleges or fix roads and bridges.

In Utah, people have been crowding gas stations to buy tickets along the border with Wyoming and Idaho, but the state constitution bans all forms of gambling. Given that most legislators belong to the Church of Jesus Christ of Latter-day Saints, which opposes gambling, a change in the constitution is unlikely.

Alaska has seen only minimal interest in creating a lottery. The state Revenue Department has studied the option as a way to ease a budget deficit, but neither the governor nor legislators has made a formal proposal.

An agency report found that given Alaska’s vast land area and small population, a lottery would probably not generate as much money as in other states. And games such as Powerball could hurt state-regulated charitable gambling, which supports numerous nonprofits.