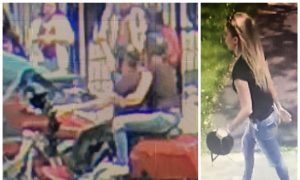 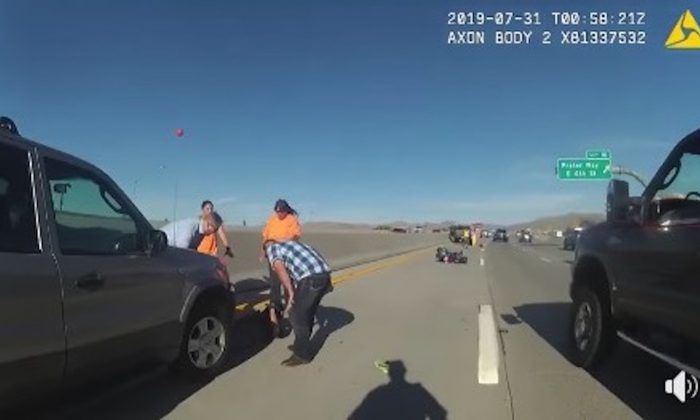 Road users helped lift an SUV off a trapped motorcyclist on the I-80 in Nevada on July 31. (Nevada Highway Patrol)
Crime and Incidents

Nevada Highway Patrol troopers have praised the actions of several road users after they jumped into action to help save the life of a motorcycle rider.

Police praised the group of Good Samaritans for lifting the front of a sports-utility vehicle and freeing the motorbiker trapped underneath.

“Your efforts were instrumental in preventing further injury to the trapped motorcycle driver,” Nevada officials said in an Aug. 1 statement. The incident happened on Tuesday, July 30, on Interstate 80 after police said the motorcyclist rear-ended a pickup truck, throwing both rider and passenger off the motorcycle. The rider ended up sliding under an SUV.

“The driver of the motorcycle made an unsafe lane change and struck the rear of a pickup truck,” police said. “Both motorcycle driver and passenger were ejected and the driver slid under an SUV passing in an adjacent lane.”

The rescue was caught on a trooper’s body camera and was released by police along with the statement that described the accident as a “serious injury crash.”

The footage shows the chaotic scene on the I-80 with vehicles stopped at the scene of the accident. The officer asks the people assisting, “put your hands up here,” before saying, “lift.”

After pulling the biker out from under the vehicle, the trooper yells “put it down, put it down,” before telling the rider, “don’t move, don’t move, stay right there.”

The motorcycle rider can be heard asking “where’s she at?” to which someone responds “she’s right there, she’s fine.” In another part of the footage, the female passenger can be seen sitting on the road as someone offers help.

The trooper is the heard calling in an update to dispatch, saying, “we lifted the car and got him out.”

“Thank you to the quick actions of the citizens that stopped to assist our Trooper,” the police added in the statement.

“This video is a great learning lesson,” one commenter wrote.

“And that’s why you wear a helmet,” someone else noted, adding, “Great job everyone.”

“As seen in the video, never remove the helmet off of a fallen rider. Leave it for the medical professionals. One lucky rider! To a fast recovery for the rider and passenger,” another person wrote.

“God bless the good samaritans that stopped to help,” someone else wrote. “Glad to see people come together to help one another.”

The incident recalls the case of Loris Baz, a French motorcycle racer, who crashed at 180 mph during a MotoGP test and emerged largely unscathed.

Baz was miraculously able to walk away from the accident, which was captured on video.

His rear tire blew out, causing him to lose control of the bike.

The incident occurred at Malaysia’s Sepang International Circuit in 2016.

“The start of the day was good,” said Baz, reported Fox News, adding: “But then we had a problem with the rear tire and I crashed out at 290 km/h (180 mph) and my bike was destroyed.”

A man in Anson, Maine, purchased a motorcycle and died a few hours later in a crash while on his first ride home on May 31.

Barry K. Morriss, 66, of Madison purchased a motorcycle on Friday morning and died in a crash half a mile from Campground Road near Cousineau’s Mill, reported WFMY News 2.

The Sheriff’s office said that speed and inexperience led to the crash. The driver, who was not wearing a helmet, lost control of the motorcycle and went into the shoulder of the road and was thrown from the vehicle into a ditch.

He was transported to Redington-Fairview General Hospital in an ambulance where he died later.

The third most common cause of death in the United States was unintentional injury.

“The most common unintentional injuries result from motor vehicle crashes, falls, fires and burns, drowning, poisonings and aspirations,” according to the CDC.

About one in five drowning fatalities are children under 14, the CDC notes. For every child that dies due to drowning, five receive emergency department care for nonfatal injuries.

The total number of emergency department visits for unintentional injuries in the U.S. in 2017 was 30.8 million, according to the CDC.