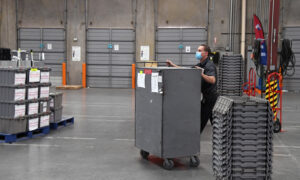 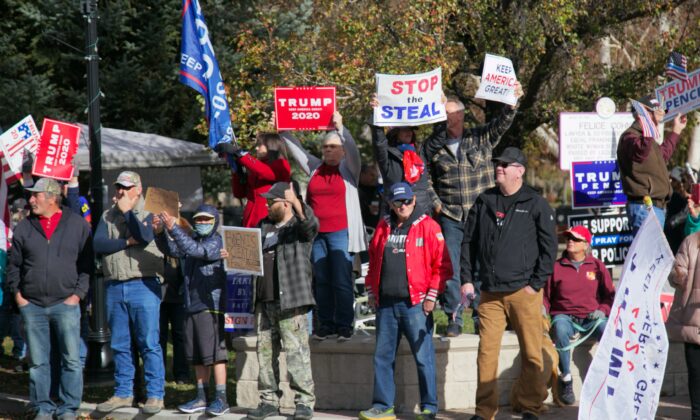 People hold signs at the “Stop the Steal” rally near the Nevada State Capitol in Carson City, Nev., on Nov. 14, 2020. (Mark Cao/NTD)
Nevada

CARSON CITY, Nev.—Hundreds of Trump supporters gathered at a “Stop the Steal” rally in Nevada on Nov. 14.

Attendees voiced concerns about the integrity of the Nov. 3 election, showed support for President Donald Trump, and called for a free and fair election.

The rally was one of more than 50 similar events held across the United States on the same day. Trump made an appearance at a rally in the nation’s capital, where tens of thousands were in attendance.

People at the rally in Nevada said they feel there is a need for a recount or reevaluation of the election results.

They waved U.S. flags near the Nevada State Capitol building and displayed signs that read “Trump-Pence,” “Trump 2020,” and “Stop the Steal.”

“The presidency should not be called until all the votes are counted—and counted correctly and not by the media,” Beverly Colline, one of the attendees, told The Epoch Times.

Victoria Galbraith, who was there with Colline, told The Epoch Times: “I voted every time since I was 18, and it’s never been like this. … This is outrageous.”

“If Biden won honestly, fine. But I don’t think he did, and that’s what this is all about, just my humble opinion,” said Scott Mahan, another attendee.

He believes that depending on the election, we could “see more socialism in this country,” he told The Epoch Times.

“And there’s going to be a lot of people that think it’s wonderful, but they don’t look at history. History is repeating itself. … If we lose this republic, we’ll never have another one,” Mahan said.

Nevada is a key swing state in the election. Former Vice President Joe Biden currently holds 703,486 (50.06 percent) of Nevada votes, while President Trump holds 669,890 (47.67 percent), according to Secretary of State Barbara Cegavske’s webpage as of the time of this writing.

“Results remain unofficial until certified by each county clerk,” the page states.

“[It] turned from a Trump landslide into just the opposite, and we don’t believe it’s true; we call for a new national vote. And that’s why we’re here,” said Jim Groth, organizer of the Carson City marches for Trump.

Groth told The Epoch Times that he hopes the national election can be held again with in-person voting in early January. He said his two sons came back from Afghanistan this year after their sixth combat tour.

“It’s time for these wars to end, and President Trump is the antithesis of the warmonger. He is the guy bringing our troops home,” he said.

Many attendees questioned the validity of the election results, pointing to the influx of results the morning after Election Day.

John Wilson, who came from Virginia City, Nevada, told The Epoch Times, “I woke up and found out there was just millions and millions of votes that came out of nowhere.”

“And it was kind of presented by mainstream media as nothing more than normal course of action. And to me, it just reeked corruption—it reeked of some sort of manipulation,” Wilson said.

An attendee named Jane told The Epoch Times: “Like a lot of other people, I was really excited—I stayed up really late. I just wished we had more control over the votes, like we used to have in previous elections.”

“Some impropriety has taken place, and I’m basing that on some of the interviews that I’ve heard from people that have given sworn affidavits,” she said.

Shannon Hill, who lives in Reno, told The Epoch Times: “If we lost fair and square, I’ll support that, but I just don’t believe that’s the case. … I feel that there are more supporters for President Trump than we’re seeing.”

Patrick, an attendee who said he previously lived in a communist country, told The Epoch Times: “I think all the legal votes should be counted—recounted. Go through every ballot, have both sides present. That way [it’s a] fair election.”

He said he felt skeptical when he saw a lot of votes go to Biden, as he believed there was cheating involved.

Cathay Vaneer, from Reno, told The Epoch Times the situation has been stressful. She said she plans on going to Hawaii with her long-time friends, but they have differing opinions on the election.

“We’re not going to get involved in any debate with them—that’s our opinion. That’s the same way I am with my brother, who’s a liberal. I won’t get in an argument with these people—they’re too dear to me.”

Madison, a rally attendee from Carson City, told The Epoch Times, “It’s time for us to stand up and say we’re not going to be pushed around and not going to let this false election go through, so we’re here to stand for Nevada and to stand for the United States.”

The Elections Integrity Project Nevada stated in a Nov. 9 press release that they suspected over 1,400 registrants of cross-state voting.

“These registrants voted in the Nevada election despite their apparent residency in California. It is being determined whether they also voted in California,” stated the press release.

A Nov. 9 press release from Secretary Cegavske stated that it is difficult for Cegavske’s office to quantify the number of ongoing voter fraud investigations or the number of voter fraud complaints that have been received. The Epoch Times has more reporting on this topic here.

Cegavske stated that her office continues to investigate all creditable allegations of fraud related to the election.

When The Epoch Times contacted the office of Cegavske for direct comment on the cross-voting claim, the office said it is not commenting on any allegations associated with the general election.

Andy Ellsmore and NTD Television contributed to this report.

Correction: A previous version of this article misstated the number of attendees at the rally. The Epoch Times regrets the error.