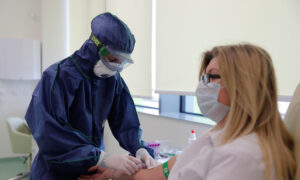 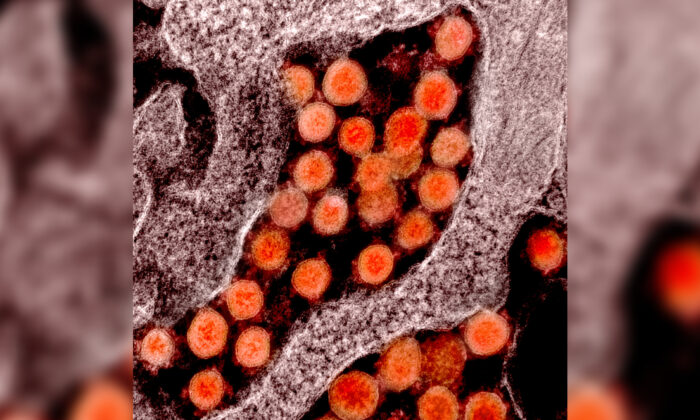 Transmission electron micrograph of particles of the CCP Virus, or SARS-CoV-2 virus, isolated from a patient. (NIAID)
PUBLIC HEALTH INFORMATION

In the first confirmed case of its kind in the United States, a young Nevada man has been re-infected with the CCP virus, the virus that causes COVID-19, with the second wave of illness far more severe than the first, a recent study shows.

The case study, published Monday in the Lancet Medical Journal, looked at a 25-year-old Washoe County man, who, in the space of two months, tested positive for two genetic variants of COVID-19, marking the fifth confirmed reinfection case worldwide.

The patient, who has no underlying conditions, first tested positive for the Chinese Communist Party (CCP) virus in April, and displayed symptoms including nausea and a cough, before testing negative in May.

At the end of May, he consulted at an urgent care center with his prior symptoms, as well as fever and dizziness. He was hospitalized five days later with shortness of breath, was given oxygen, and again tested positive for the CCP virus in early June.

“The second infection was symptomatically more severe than the first,” the case study authors wrote.

Since the COVID-19 outbreak first emerged in Wuhan, China, last year, only five cases of reinfection have been recorded out of more than 37 million confirmed cases. An Ecuador patient was the first recorded reinfection case where a more severe bout of illness upon reinfection was displayed.

There have been more than 5 cases of people re-testing positive for COVID-19, but they have not been confirmed to be re-infections. In South Korea, which reported more than 100 cases, its Centers for Disease Control and Prevention said after weeks of research that the test results appeared to be “false positives” caused by lingering—but likely not infectious—bits of the virus.

The researchers said it is not clear why the Nevada patient displayed more severe symptoms upon reinfection.

“There are still many unknowns,” Mark Pandori, lead author of the study and director of the Nevada State Public Health Laboratory said. “Our findings signal that a previous SARS-CoV-2 infection may not necessarily protect against future infection. The possibility of reinfections could have significant implications for our understanding of COVID-19 immunity, especially in the absence of an effective vaccine.”

Pandori urged people who have recovered from COVID-19 to continue to comply with social distancing measures, to wear a face mask, and to practice good hygiene.

Scientists are studying how the other parts of the immune system activate to fight the CCP virus. Antibodies are only one part of the body’s immune response, and over time, they wane naturally.

In examining COVID-19 immunity, some scientists are looking into other immune cells known as T-cells, which are produced as an immune response to molecules known as antigens, and can be programmed to tackle the same or similar viruses in the future.

A recent study from Karolinska Institute in Sweden, which hasn’t yet been peer reviewed, found that many people who suffered mild or asymptomatic COVID-19 have T-cell-mediated immunity—even when antibodies can’t be detected. The authors believe this can prevent or limit reinfection, estimating that one-third of people with symptomless COVID-19 could have this kind of immunity.

“Memory T cells are known for their ability to affect the clinical severity and susceptibility to future infection,” authors for an article published in The BMJ wrote in September. “T cell studies documenting pre-existing reactivity to SARS-CoV-2 in 20-50 percent of people suggest that antibodies are not the full story.”

The treatment was hailed by President Donald Trump as key to his recovery from the COVID-19. He pledged to make the monoclonal antibody treatment available to Americans for “free,” and vowed that the Food and Drug Administration (FDA) would quickly authorize the experimental drug.