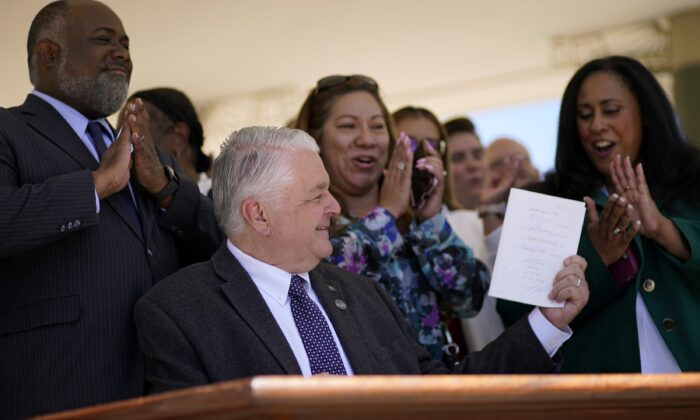 Nevada’s governor signed a measure on June 11 that aims to make the state the first presidential primary, in an ongoing battle with other states that hold early votes.

Assembly Bill 126 (pdf) requires the primary during a presidential election year to be held on the first Tuesday in February.

The law “establishes Nevada as the first in the Nation presidential primary and this brings me great pride as the diversity and culture found in the people of the great State of Nevada undoubtedly represents the demographical composition of who we are as a Nation,” Gov. Steve Sisolak, a Democrat, said after signing the bill in a ceremony.

The bill, which also transforms the state’s caucuses into primaries, was approved by the Nevada Assembly last month, 30–11, and by the state Senate, on a 15–6 vote.

New Hampshire state law dictates that presidential primary elections shall be held on a date that is a week or more before the date on which any other state shall hold a similar election.

“The purpose of this section is to protect the tradition of the New Hampshire first-in-the-nation presidential primary,” the law states.

Iowa’s code, meanwhile, states that its caucuses, or version of the primaries, shall be held at least eight days earlier than any other scheduled caucus or primary for the presidential election.

Nevada Assemblywoman Brittany Miller, a Democrat who was one of the new bill’s primary sponsors, said on June 11 that the legislation “switches us from a presidential caucus to a primary … but, more importantly, makes our incredibly diverse state FIRST IN THE NATION!”

“That means, you won’t be waiting for Iowa and New Hampshire anymore, it’s all eyes on Nevada!” she wrote on Facebook.

In a recent statement, DNC Chairman Jaime Harrison said, “We are going to continue to let the process play out, as it does every four years, and look forward to hearing the insight and recommendations from all interested parties on the 2020 reforms, and on the 2024 calendar at the appropriate time in the process.”

“Our alliance is strong and we will continue to work together to preserve this historic process.”

Asked whether President Joe Biden, as the most powerful Democrat in the nation, supports switching the order of presidential primary contests, White House press secretary Jen Psaki declined to answer.

“I certainly understand the interest, but I’m not going to weigh in on the order of a presidential primary contests [sic] from here,” she told reporters in Washington.