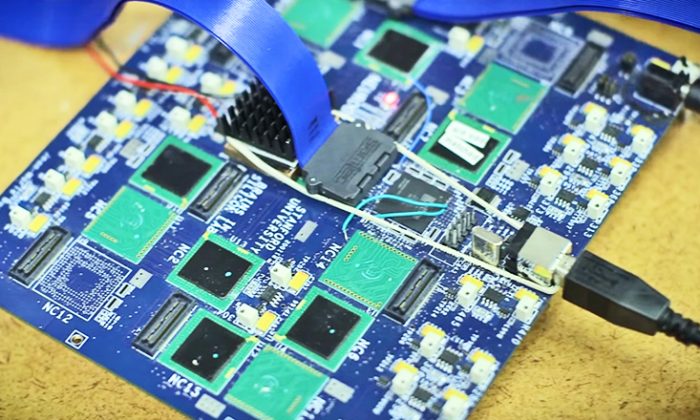 Neurogrid's speed and efficiency make it ideal for more than just modeling the human brain. Bioengineers are working to develop prosthetic limbs for paralyzed people that would be controlled by a Neurocore-like chip. (Stanford University)
Tech

‘Neurogrid’ Chips Mimic the Brain to Use Less Energy

Compared to the human brain, today’s computers are ridiculously slow and take about 40,000 times more power to run.

“From a pure energy perspective, the brain is hard to match,” says Kwabena Boahen, associate professor of bioengineering at Stanford University.

Boahen and his team have developed a circuit board consisting of 16 custom-designed “Neurocore” chips. Together these 16 chips can simulate 1 million neurons and billions of synaptic connections. The team designed these chips with power efficiency in mind.

Their strategy was to enable certain synapses to share hardware circuits. The result was a device called Neurogrid. It’s about the size of an iPad and can simulate many more neurons and synapses than other brain mimicking devices using only about the power it takes to run a tablet computer.

But it’s still a power hog compared to the brain.

“The human brain, with 80,000 times more neurons than Neurogrid, consumes only three times as much power,” explains Boahen. “Achieving this level of energy efficiency while offering greater configurability and scale is the ultimate challenge neuromorphic engineers face.”

Comparison aside, Neurogrid’s speed and low power characteristics make it ideal for more than just modeling the human brain. Boahen is working with other Stanford scientists to develop prosthetic limbs for paralyzed people that would be controlled by a Neurocore-like chip.

“Right now, you have to know how the brain works to program one of these,” says Boahen, gesturing at the $40,000 prototype board on the desk of his office. “We want to create a neurocompiler so that you would not need to know anything about synapses and neurons to able to use one of these.”

Other Attempts to Mimic the Brain

In an article published in the Proceedings of the IEEE, Boahen offers an overview of other ongoing neuromorphic research efforts, including the European Union’s Human Brain Project, which aims to simulate a human brain on a supercomputer.

By contrast, the US BRAIN Project—short for Brain Research through Advancing Innovative Neurotechnologies—has taken a tool-building approach by challenging scientists to develop new kinds of tools that can read out the activity of thousands or even millions of neurons in the brain as well as write in complex patterns of activity.

Zooming from the big picture, Boahen’s article focuses on two projects comparable to Neurogrid that attempt to model brain functions in silicon and/or software.

One of these efforts is IBM’s SyNAPSE Project—short for Systems of Neuromorphic Adaptive Plastic Scalable Electronics. As the name implies, SyNAPSE involves a bid to redesign chips, code-named Golden Gate, to emulate the ability of neurons to make a great many synaptic connections—a feature that helps the brain solve problems on the fly.

At present a Golden Gate chip consists of 256 digital neurons each equipped with 1,024 digital synaptic circuits, with IBM on track to greatly increase the numbers of neurons in the system.

Heidelberg University’s BrainScales project has the ambitious goal of developing analog chips to mimic the behaviors of neurons and synapses. Their HICANN chip—short for High Input Count Analog Neural Network—would be the core of a system designed to accelerate brain simulations, to enable researchers to model drug interactions that might take months to play out in a compressed time frame.

At present, the HICANN system can emulate 512 neurons each equipped with 224 synaptic circuits, with a roadmap to greatly expand that hardware base.

Each of these research teams has made different technical choices, such as whether to dedicate each hardware circuit to modeling a single neural element (e.g., a single synapse) or several (e.g., by activating the hardware circuit twice to model the effect of two active synapses). These choices have resulted in different trade-offs in terms of capability and performance.

In his analysis, Boahen creates a single metric to account for total system cost—including the size of the chip, how many neurons it simulates and the power it consumes.

Neurogrid was by far the most cost-effective way to simulate neurons, in keeping with Boahen’s goal of creating a system affordable enough to be widely used in research.

But much work lies ahead. Each of the current million-neuron Neurogrid circuit boards cost about $40,000. Boahen believes dramatic cost reductions are possible. Neurogrid is based on 16 Neurocores, each of which supports 65,536 neurons. Those chips were made using 15-year-old fabrication technologies.

By switching to modern manufacturing processes and fabricating the chips in large volumes, he could cut a Neurocore’s cost 100-fold—suggesting a million-neuron board for $400 a copy.

With that cheaper hardware and compiler software to make it easy to configure, these neuromorphic systems could find numerous applications.

For instance, a chip as fast and efficient as the human brain could drive prosthetic limbs with the speed and complexity of our own actions—but without being tethered to a power source.

The National Institutes of Health is funding the project.