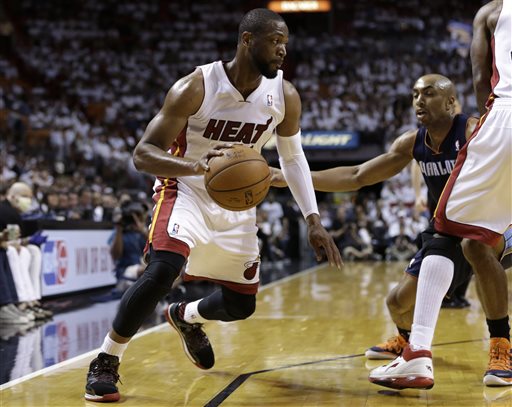 The Brooklyn Nets take on the Miami Heat in the second round of the NBA playoffs, beginning on May 6.

The first two games of the series will be at AmericanAirlines Arena in Miami.

The games will both be broadcast on TNT.

Live streaming will also be available through TNT.

The Nets, the lowest seed left in the playoffs at No. 6, got past the No. 3 Toronto Raptors in seven games. The team won on the Raptors home court 104-103.

The No. 2 Heat demolished the No. 7 Charlotte Bobcats in four games. The Heat were the only team in the first round to sweep a series.

The Nets beat the Heat in all four games the two teams played against each other in the regular season, but both teams have made changes since then. Dwyane Wade is looking healthier for the Heat, while the Nets have everyone healthy except for center Brook Lopez, who is out for the season.

See a preview from the Associated Press below the photo.

Brooklyn Nets’ Paul Pierce (34) reacts after teammate Andray Blatche scores during the first half of Game 6 of the opening-round NBA basketball playoff series against the Toronto Raptors, Friday, May 2, 2014, in New York. (AP Photo/Frank Franklin II)

MIAMI—Dwyane Wade hardly thinks the regular-season series between Brooklyn and Miami was meaningless.

The Nets swept the Heat, winning three of those games by a mere point, taking the other in double overtime. That’s not exactly a show of dominance from a scoring-differential perspective.

The Nets won all four, and that has Miami’s full attention as the sides get ready to open an Eastern Conference semifinals series. Miami, the league’s two-time defending champion, will host Game 1 on Tuesday night.

“They figured out a way to beat us four times and that hasn’t happened,” said Wade, the Heat guard who missed two of the four Brooklyn-Miami games this season. “So we’ve got to crack that code.”

History shows the Heat will struggle in that code-cracking plan.

This series marks the 26th time that teams will meet in a best-of-seven series after one club went 4-0 or better against the other in the regular season. In each of the first 25 such instances, the regular-season winner also won the playoff matchup.

The buildup for this started in July, when the Nets added Paul Pierce and Kevin Garnett and started talking about a championship.

That got Miami’s attention.

The 4-0 record, that just got even more of Miami’s attention.

“The goal from the beginning when we came in here was to win a championship and we understand that in order to do that, you have to go through the best,” Pierce said. “And Miami being that team over the last couple years, we figured this was going to be a test for us.”

It’s the fifth time Pierce and LeBron James will be on opposite sides of a playoff series. Pierce won the first two when James was in Cleveland; James has won the last two since coming to Miami, topping Garnett and Pierce when they wore Boston colors.

To James, this isn’t about breaking a tie. He’s got bigger goals.

“It should be very challenging,” James said.

Here’s five things to know about the series.

HELLO, BROOKLYN: James said he realized quickly after the personnel moves last summer that the Netswould find their way into the postseason-contender mix, pointing out Monday that they’ve gotten here even without injured C Brook Lopez. And while the Nets say that there’s no real rivalry with Miami yet, there’s clearly some personal scores already involved. “They know my tendencies. I know their tendencies,” James said.

THE 4-0 STAT: Heat coach Erik Spoelstra isn’t bringing up his team’s 0-4 record against Brooklyn this season much, opting to look more forward instead. “Depends on who you ask,” Spoelstra said of its significance. “We’re looking at us and how we have to impact the games to give ourselves the best chance to win.”

LIVINGSTON RETURNS: It could be argued Nets G Shaun Livingston owes some of his success to theHeat, since they were the team that lured him back to the NBA in 2008 — 17 months after he endured one of the more gruesome knee injuries in recent memory. Livingston played in only four games with the Heat before getting waived in what was largely a salary-related move. The Nets are his fifth team since that brief Miami stint, but the Heat still speak highly of Livingston. He’s had some big moments already against the Heat this season, and if he has more in the next couple weeks, that’s obviously going to be a bonus for Brooklyn.

KIDD VS. HEAT: Kidd’s record against the Heat in recent years has been beyond stellar. Going back to the 2007-08 season, Kidd’s teams won 16 of the last 21 games he played in against Miami, and obviously the rookie Nets coach is 4-0 versus the Heat so far this season. Add it up, and that’s a 20-5 record of late. But it hasn’t always been that rosy: Kidd also had streaks of five, nine and six consecutive losses against the Heat during his playing career.