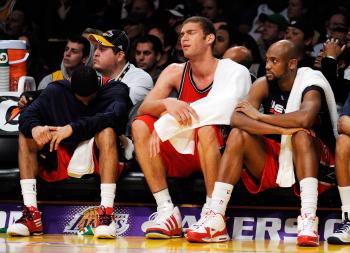 The New Jersey Nets do it better than anyone else.
NBA

Well, it’s official. The New Jersey Nets now have the dubious distinction of holding the NBA’s worst start to a season record at 0–18 after their 117–101 loss to the Dallas Mavericks on Wednesday.

Not to say that anyone was surprised with how things turned out at the IZOD Center. We all saw this one coming; not even the Nets’ firing of head coach Lawrence Frank on Sunday could help break what is looking to be a lasting curse. But that doesn’t make Wednesday’s loss any easier to swallow for Nets fans.

The Mavs are the Southwest Conference leaders and have good talent in guard Jason Kidd and big man Dirk Nowitzki, despite some rough games against the Golden State Warriors and Cleveland Cavaliers last week. It was only fitting that the Kidd-led Mavericks were the team to do New Jersey in. Kidd was traded from the Nets in 2008 after seven seasons with the team.

With Nets interim coach Tom Barrise at the helm before the team’s newly appointed head coach Kiki Vandeweghe—who is also the team’s general manager—takes charge at Thursday’s practice, the night got off to a competitive start.

The Nets stayed with and even led the Mavs by three at one point in the first quarter, which ended in a 28–28 tie and a glimmer of hope for the floundering team.

But the second quarter would be the nail in the Nets’ coffin with an all-out scoring onslaught from the Mavs that saw 49 points while holding the Nets to 22.

Kidd, Nowitzki, center Erick Dampier, guard Jason Terry, and forward Tim Thomas all hit double-digit scoring in the first half alone, with the Mavs going a perfect 12–12 in free throws and an impressive 7–8 from deep. Kidd also had seven assists.

The Nets came out with fire in the third quarter—which was almost certainly lit under them by a half-time Barrise tirade—and didn't let the Mavs pull further away.

New Jersey rallied in the fourth quarter and the Mavs got into foul trouble with Dampier and Thomas picking up their fifth personal fouls.

The Nets outscored the Mavs 23–12 in the fourth to finish the game with a respectable 101 points.

Guard Chris Douglas-Roberts was the man of the hour for the Nets, with 10–21 shooting for 24 points. Center Brook Lopez took the ball up strong and went 12–13 in free throws for the night.

With Wednesday’s 0–18 record etched in history books, the only questions now are just how far into the red can the Nets fall this season, and what is going to be Vandeweghe’s strategy to get them to turn the corner?

Vandeweghe joined the Nets in 2007 as a special assistant to club President Rod Thorn, and took up the reigns of GM in May 2008.

He has a long basketball history under his belt, playing a star role at UCLA and 13 seasons in the NBA—his first in 1980 with the Mavericks.

But he has little coaching experience and will undoubtedly be turning to his newly acquired right-hand man Del Harris for help in picking up the pieces of a broken team. Harris is an experienced former Mavericks assistant coach.

Vandeweghe outlined his vision for the team in Tuesday morning’s press conference with President Rod Thorn in East Rutherford, N.J.

“What we might do is simplify things a little bit for the young players. We’re going to really focus on the development of our young players—keep them getting better and winning that way,” Vandeweghe said.

“On the court, I would expect we might play a bit quicker, might turn this into a 94-foot game. We have a very fast point guard, we have players who are athletic and can run. We want to get out and open up the court a little bit.”

The Nets’ next best hope of notching a game in the positive is on Sunday against their almost equally deplorable neighbors, the 4–15 New York Knicks.