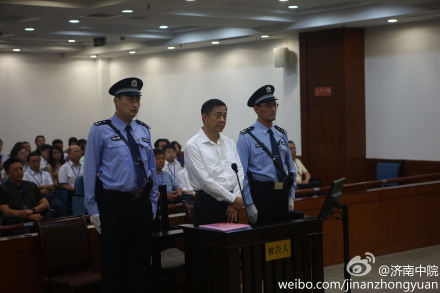 In most photos of Bo Xilai when he was official, he looked much taller than the people around him. In the courtroom, defendant Bo is flanked by two guards. Note the tall stature of the guards relative to Bo. These guards are carefully selected to create a public impression. (Weibo of Jinan Court)
China

On the first day of his trial on Aug. 22 in Jinan, China, disgraced Chinese politician Bo Xilai retracted his bribery confession and professed his innocence. Then he himself questioned witnesses with carefully crafted questions.

No reporters were allowed inside the courtroom, but the court’s Weibo account (China’s Twitter-like platform) released photos of the proceedings. Netizens have been carefully examining the images and analyzing them for meaning.

In most of photos of Bo Xilai when he was official, he looked much taller than the people around him. In the courtroom, Bo is flanked by two guards: they’re much taller than him, and were probably carefully selected to create the impression of state power.

Bo leers at the judge while sitting with one leg cross over the other, a posture redolent of Chinese officials.

Bo Xilai makes a gesture with his left hand during his trial, extending three fingers. The gesture has caused widespread speculation and parody among mainland Chinese. Some people say the gesture means he is OK. Some say it means he will come back following a Chinese idiom “Dong Shan Zhai Qi.” Others speculated that it was a profane gesture toward the court.

The courtroom in which Bo Xilai is being tried. Over 100 people were in attendance.

Excerpts of the transcript from the hearing, in which Bo Xilai queries a witness with carefully-worded questions. The witnesses’ response is “no” in all cases.