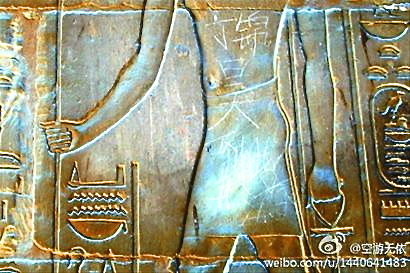 A netizen posted on microblog a photo he took while visiting Luxor Temple in Egypt, which showed Ding Jinhao’s graffiti on the temple carvings. (Weibo.com)
China

A young Chinese tourist who defaced an ancient Egyptian temple with graffiti responded to an uproar on the internet, “What’s the big deal about writing a few words!” Back in China, netizens commented in sorrowful tones about why this child’s vandalism was part of a very big deal.

On May 6 another Chinese tourist, going by the Internet handle of Kongyouwuyi, discovered the words “Ding Jinhao visited here” written in Chinese on a temple wall in Luxor. He took a picture of it and posted it on his Weibo microblog on May 24.

“We tried to wipe the shameful [words] off with a napkin, but it was difficult to clean, and we couldn’t use water as this is a relic from 3,500 years ago,” Kongyouwuyi wrote.

“Nobody said much after seeing it, our whole group felt ashamed,” he told the Shanghai Evening News.

On May 25, netizen Labixiaoqiu identified the author of the graffiti as 15-year-old Ding Jinhao, a middle school student from Nanjing.

Labixiaoqiu also commented on his Weibo that families of students enrolled at Youfu West Street Primary School—the school Ding had previously attended—are not “ordinary,” meaning that this school is for the children of those who have power or connections.

By May 26, the search term “Ding Jinhao” had become the hottest search topic on China’s microblog service, with 263,929 people expressing their opinions. Many said that it embarrassed China and damaged the country’s image. Major Western media also reported the incident.

Chinanews.com said on May 27 that Ding’s parents publicly apologized for their son’s behavior and asked for forgiveness and for giving him a chance to correct his mistake. They also said their son had cried all night long.

On his Weibo, however, Ding said: “I’m not the only disgraced Chinese. What’s the big deal about writing a few words!”

Netizens connected the vandalism to trends in Chinese society that are far beyond the ken of a 15-year-old.

Folk calligrapher Lv Liangyuan wrote on his blog: “In the eyes of some Chinese, China has become more and more affluent and powerful and needs to let people outside China know about this. So, some Chinese have gone abroad in recent years and have done many things people around the world won’t easily forget, such as buying-up all the luxury items and leaving their names on famous historic and cultural sites around the world.”

One Weibo netizen said: “It would be better if a certain organization and regime could stop the habit of vandalism. Such deeds, when called for by administrative forces, are even more damaging and of deeper impact. It didn’t begin with the Cultural Revolution nor did it end there.”

Another netizen said: “This is the ill consequence of contemporary Chinese people’s collective moral failure. Adaptation to circumstances has made Chinese people more flexible, but has also made them follow standards that have turned them into a laughingstock.”

Netizen Yelimi wrote on a famous Chinese forum: “With his action this Chinese person announced to the world, ‘We did not hesitate to destroy our own 5,000 years of culture, so ruining your 3,500-year-old cultural relic takes nothing at all!’”