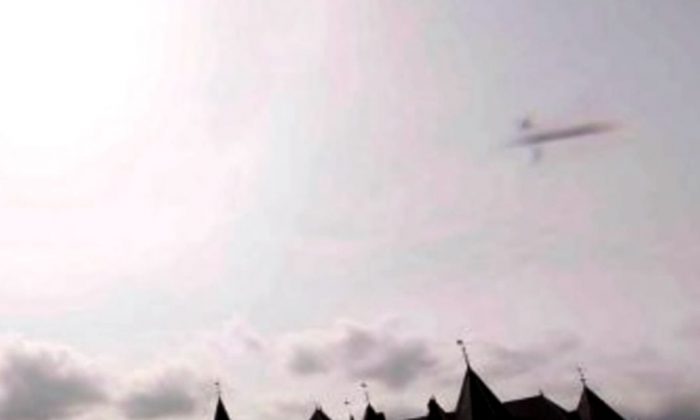 A screenshot of YouTube shows the purported UFO over the Netherlands.
12- OBSOLETE

An odd-shaped UFO in the Netherlands was photographed by a woman over a castle built nearly 800 years ago.

The purported UFO has an “S-shape” and is shaped in a tubular manner. It was photographed by Corinne Federer, who was visiting the Muiderslot Castle, which was built in 1286, with her mother.

“Having reviewed the raw files, there’s no overt indication that the photos have been manipulated with post editing software,” he wrote in an e-mail.

“The object’s appearance is internally consistent with the rest of the photo. For instance, look at the darker area of the underside of the object compared with the clouds. The shadowing is similar on the underside as well as the lighting on the top of the object and the clouds where the sun is brightest. Having the sun in the frame is helpful because it indicates where shadows should appear,” he continued.

Federer told the website that “if it had been any type of missile, it would’ve had multiple fins, but facing the same direction. We heard nothing, it was completely quiet out.”

“It was kind of creepy,” she continued.

She said she used High Dynamic Range photography to shoot the castle when she spotted an object in the sky.

“The most interesting part of that, for me, is those fins are on the opposite side. At first, I thought the fin side must be a tail, but after looking at it from the second image, it almost looked like the fins were (at) the front and it was turning around and coming back into the frame,” she added.

In the past month, there have been several UFO sightings in different parts of Canada, including Prince Edward Island and Vancouver.

And a UFO was also filmed flying into a volcano in Mexico.

It was reported by CTV that in Canada, UFO sightings have skyrocketed in recent years.