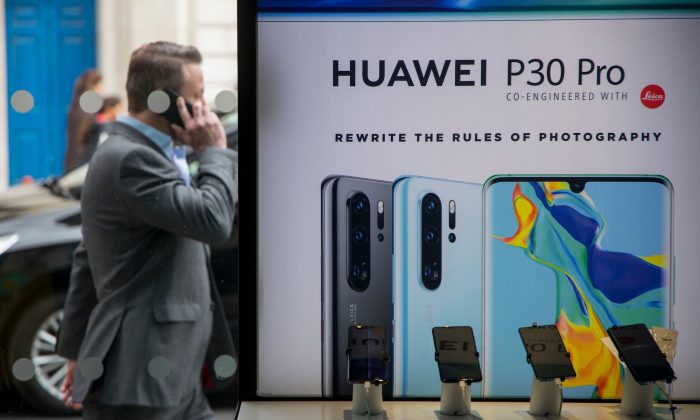 A pedestrian walks past a Huawei product stand in London, on April 29, 2019. (Tolga Akmen/AFP/Getty Images)
Europe

Netherlands Probing If Huawei Is Using ‘Secret Back Doors’ to Customer Data and Spying for Beijing, Report Says

BRUSSELS—The Netherlands’ national intelligence agency has begun an investigation into whether Chinese telecommunications giant Huawei is using “secret back doors” to access customer data, according to security sources.

Operatives at the General Intelligence and Security Service (AIVD), based in The Hague, are looking into whether the firm has enabled spying on a mass scale by the Chinese regime, the Dutch newspaper Volkskrant reported.

In April, the intelligence agency warned it would be “undesirable for the Netherlands to depend on the hardware or software of companies from countries running active cyber programs against Dutch interests.”

In a report to the Dutch cabinet, spy chiefs identified China and Russia as threats, and said that “with regard to the telecom sector, one can think of the collection of customer, geolocation, and telephone traffic data” as risks.

They also recommended limiting the use of Huawei in the country’s 5G network and phasing the company—which works with three of the country’s biggest networks—out of much of the existing infrastructure for older 2G, 3G, and 4G mobile internet networks.

A spokesman for the AIVD declined to comment on the newspaper report, saying: “We don’t say if it’s right or if it’s wrong. We never respond to questions about possible ongoing investigations because that can complicate our work.”

Bart Jacobs, a professor of computer security at Radboud University in Nijmegen, Netherlands, said the news that an investigation had been launched “sounds like a smoking gun, with possible geopolitical consequences,” according to Volkskrant.

The report came as three key EU leaders, including the Netherlands’ Prime Minister Mark Rutte, jointly said they would not follow the decision of the United States to shut the Chinese firm out of the European market completely.

Germany’s Chancellor Angela Merkel and France’s President Emmanuel Macron also joined the pushback against the United States, saying that if Huawei passes the relevant security checks, it will be allowed to provide some 5G infrastructure.

The United States wants to see a total ban on Huawei equipment in 5G networks of allies, hinting that if allies allow Huawei into their 5G networks, there could be less intelligence sharing with them.

While visiting the UK recently, U.S. Secretary of State Mike Pompeo said the United States “has an obligation to ensure the places where we operate, places where U.S. information is, places where we have national security risks, that they operate within trusted networks and that is what we will do.”

Recent leaked reports indicate that the UK will allow Huawei to provide equipment for non-core elements of its 5G network.

Europe has been divided over how to respond to the Chinese company’s involvement in the rollout of super-fast 5G networks, with some countries embracing it but others wary of the security implications.

The European Commission, which is the bloc’s executive arm, has urged member states to work together with global partners to thrash out a common position on the issue.

In a statement, Huawei said it was “surprised” by the allegations of spying, but that it wouldn’t respond to them because they were made by anonymous sources.

However, a spokesman for the company insisted it “keeps the door closed to governments or others who want to use our network for activities that would threaten cyber security.”

At an event in Brussels on May 21, the firm’s most senior representative to the EU institutions, Abraham Liu, insisted that it obeys the law in all countries across the globe where it operates.

He said the company is still ready to sign contracts with European governments to supply 5G infrastructure despite U.S. President Donald Trump’s decision to blacklist it, and vowed the company will “continue to persevere” on the continent.

Beijing has recently passed legislation that requires all Chinese citizens and entities to provide intelligence information if requested.

Article 7 of China’s 2017 National Intelligence Law stipulates that Chinese “organizations and citizens shall, in accordance with the law, support, cooperate with, and collaborate in national intelligence work.”

Article 14 of the law adds: “The state intelligence department has the right to ask any [Chinese] government, organization, and citizen to supply the necessary support, assistance, and cooperation.”