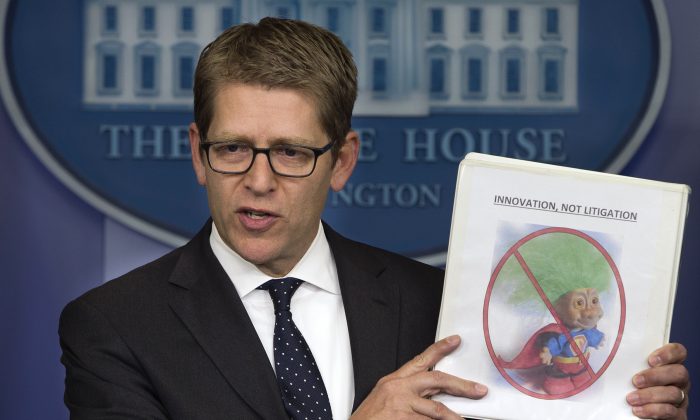 White House press secretary Jay Carney holds up a folder with an image of a troll and the words "innovation, not litigation" during the daily press briefing at the White House in Washington, D.C., on June 4, 2013. (AP Photo/Evan Vucci)
Business & Economy

A string of big name companies—including Netflix, Yahoo, Target, and Pinterest—are being sued by an obscure firm for allegedly violating a patent that deals with encryption technology.

CryptoPeak, which has little online presence apart from records of filing these lawsuits, claims that the companies infringe on an encryption patent it owns that concerns Elliptic Curve Cryptography, a technique commonly used to secure HTTPS connections and make safe transfers between data centers.

“Defendant has infringed and continues to directly infringe one or more claims of the ‘150 Patent … having made, and/or using one or more websites that operate in compliance with the standards of Elliptic Curve Cryptography (“ECC”) Cipher Suites for the Transport Layer Security (“TLS”) protocol (the “Accused Instrumentalities”),” the lawsuit against Netflix reads.

Similar lawsuits against more than a dozen companies share the same language.

The direct costs of patent trolling to the targeted companies can add up to as much as $29 billion per year.

The patent, titled “Auto-Escrowable and Auto-Certifiable Cryptosystems,” was granted by the U.S. Patent Office in 2001 and then later sold to CryptoPeak.

Some of the companies are fighting the lawsuits, which seek financial relief for the alleged infringement. Others firms, such as Scottrade, a Missouri-based discount retail brokerage firm, are choosing to settle out of court.

The lawsuits have been widely labeled as another case of “patent trolling,” and some of the defendants are confident that they can win the suit, but quick settlements in the face of similar lawsuits are common.

The lawsuits were filed in the U.S. District Court for the Eastern District of Texas, which has been a notorious magnet for patent troll litigation for years due to its unique legal procedures that tend to favor plaintiffs in these cases—procedures like the local discovery order that can often require defendants to spend enormous sums on documentation, encouraging many of them to make quick settlements.

In the first half of 2015, the Eastern District drew 1,387 patent cases, 44 percent of all lawsuits of that type in the nation, even though it was just one of the 89 district courts in the United States, according to the Electronic Frontier Foundation.

Patent reform is an issue that has received bipartisan support in Congress, and earlier this year the House passed the Innovation Act, which pares down existing intellectual property rights. But its companion bill in the Senate has met challenges, and lobbyists for pharmaceutical and biotechnology companies warn that hasty patent reform could undermine fair business interests in their sector.