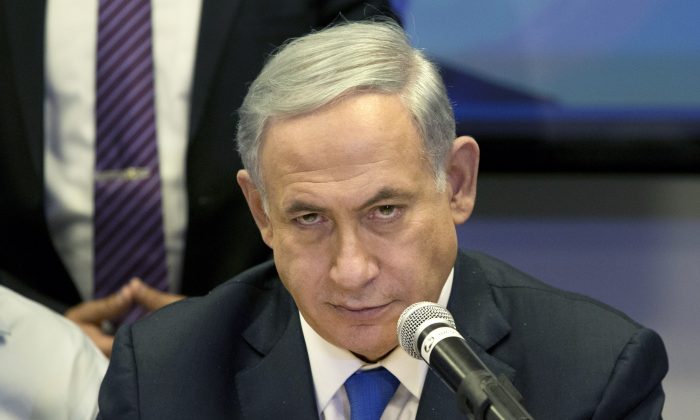 In a Monday, March 16, 2015 file photo, Israeli Prime Minister Benjamin Netanyahu attends a Likud party meeting in Or Yehuda near Tel Aviv, Israel, a day ahead of legislative elections. After a strong performance in last week’s parliamentary election, Netanyahu seems to be cruising toward forming a new government of hardline and religious parties. But in the smoke-and-mirrors world of Israeli politics, a centrist government more amenable to peace negotiations could easily emerge at the last minute instead. (AP Photo/Ariel Schalit, File)
Middle East

JERUSALEM— Israel’s prime minister said Sunday he will “fiercely reject” any international proposals meant to bring about a solution to the conflict with the Palestinians.

Benjamin Netanyahu made the remarks ahead of a visit by French Foreign Minister Laurent Fabius. France has said it will propose a resolution in the United Nations Security Council with a framework for negotiations toward resolving the Israeli-Palestinian conflict.

“The way to reach an agreement is only through negotiations and we will fiercely reject attempts to impose international dictates,” he told his weekly Cabinet meeting.

Netanyahu said that attacks against Israelis will continue with any international proposal that does not take Israel’s security concerns into account.

Early Sunday, a Palestinian assailant stabbed and critically wounded an Israeli policeman in Jerusalem’s Old City. The policeman shot the attacker, critically wounding him, before collapsing and being rushed to a hospital.

On Friday, a Palestinian shot an Israeli hiker to death in the West Bank.

Fabius is coming to the region to sound out leaders about a planned Security Council resolution that aims to restart peace talks after a more than year-long lull.

Palestinian officials and French diplomats have said the proposal would call for basing the borders between Israel and a future Palestinian state on the lines that existed before Israel captured the West Bank, east Jerusalem and Gaza Strip in the 1967 Mideast war. It also would set a two-year deadline for an agreement. Israel rejects a return to its pre-1967 lines, saying they are indefensible. It also opposes deadlines.

Two decades of talks brokered mainly by the United States have failed to produce a two-state solution. The latest peace push, led by U.S. Secretary of State John Kerry, fell short in April 2014 after nine months of tense negotiations and the gaps between Israeli and Palestinian positions remain vast.