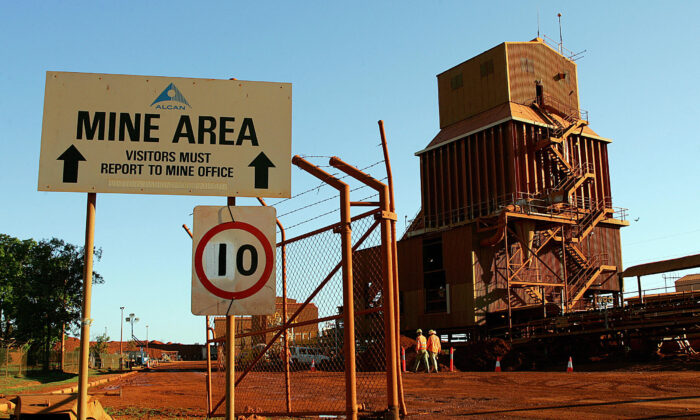 The Alcan Gove bauxite mine and alumina processing plant is the largest industrial undertaking in the Northern Territory, Australia on Dec. 3, 2005. (Torsten Blackwood/AFP via Getty Images)
Australia

Queensland Premier Annastacia Palaszczuk has said investment and support will continue to flow into her state’s mining industry despite Australia’s commitment to net zero carbon emissions by 2050.

Global decarbonisation ambitions, recently the focus of the COP26 summit in Glasgow, did not mean a “zero-sum game” for the resources extraction industry in mineral-rich Queensland, the premier told the Queensland Resources Council event on Wednesday, News.com.au reported.

“I am confident that our best days remain ahead of us,” Palaszczuk said.

“The resources sector will continue to grow and support more jobs across Queensland.

“The global commitments at COP26 towards net zero emissions by 2050 are not a zero-sum game between action on climate change and mining jobs.

“These commitments to net zero will make Queensland’s resources sector even stronger over the long-term,” she said.

The premier said Queensland had the minerals the world needed to create green energy technology, such as vanadium and cobalt, to build batteries.

Palaszczuk also spoke of the need to extract resources from under the ground while declaring that the state had an abundance of wind and solar.

“As a key input for steel, Queensland’s metallurgical coal will continue to support the construction of wind turbines across the world.

“The Queensland resources sector has a critical role to play in ensuring that renewable energy is delivered affordably and sustainably.”

Amid global efforts to shift towards green energy, Palaszczuk announced the Queensland government had approved a vanadium mine, Saint Elmo, near Julia Creek in the central northwest of the state.

“I don’t just want to see vanadium mined in Queensland. I want to see onshore processing and manufacturing of vanadium batteries as well.

“I want to see Queensland’s minerals used in renewable batteries across the nation and globally.

“To further support battery manufacturing in Queensland, my government will develop a Queensland Battery Industry Strategy.”

The state’s treasury department reported that before the COVID-19 pandemic, mining activity made up about 12 percent of Queensland’s economy in the 2019 to 2020 financial year.

The state’s coal and bauxite reserves are among the largest in the world and are sought after internationally for their high-grade quality.

Further, LNG and mineral accounted for about 81 percent of the nominal value of Queensland’s overseas merchandise exports in the financial year before the pandemic began.

The premier’s announcement comes as her state is forecasted to see a fall of 11 percent in overseas exports in the 2020 to 2021 financial year before it’s expected to rebound by just over 9 percent the following year.