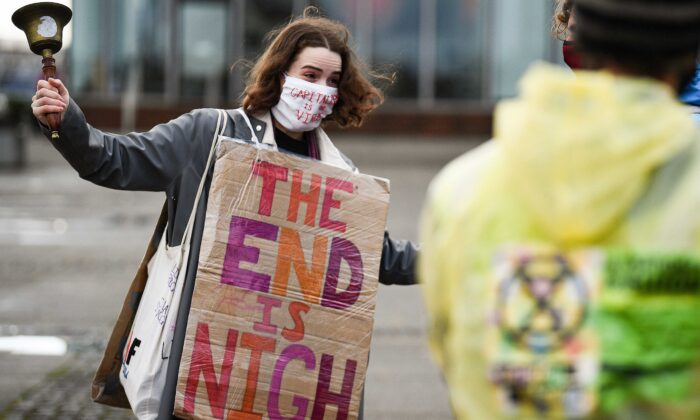 So far, the big message from the Glasgow, Scotland, climate conference is the role of finance in decarbonizing the global economy. It’s a dangerous development.

In his speech to the 26th Conference of the Parties (COP26) last week, Britain’schancellor of the exchequer, Rishi Sunak, pledged action to “rewire the entire financial system for Net Zero.” Finance has taken center stage in large part because of inadequate government policies. According to the U.N. Environment Program (UNEP), around two-thirds of global emissions are linked to private household activity. Reducing them requires major changes in people’s lifestyles, UNEP said.

Rather than imposing carbon taxes that really hurt—the Intergovernmental Panel on Climate Change estimates a minimum of $135 a ton, rising up to $14,300 a ton in order to hit net zero in 2050—governments prefer to outsource the heavy lifting to the world of finance in the hope that it will provide a pain-free path to the net-zero goal.

Up until now, central banks and financial regulators—particularly the Fed and the SEC in the United States—have been maintaining the pretence that their involvement in climate policy is motivated by concern about climate financial risk. As I show in my new report for the RealClearFoundation, “Climate-Risk Disclosure: A Flimsy Pretext for a Green Power Grab,” climate financial risk is a smoke screen for a green power grab. Now, Sunak has done the world a favor and exposed it for what it is.

Financial institutions signed up to the Glasgow Financial Alliance for Net Zero hold assets worth more than $130 trillion.

“This is an historic wall of capital for the net-zero transition around the world,” Sunak declared.

Sunak might well have been speaking from a script provided him by Mark Carney, former Governor of the Bank of England and instrumental in bringing together the Glasgow Financial Alliance.

“We must build a financial system entirely focused on net zero,” Carney said.

Though billionaires and multimillionaires they may be, oligarchs of finance are custodians of other people’s money. What’s missing in the craze for net-zero and ESG (environmental, social, and government) investing is B—as in B for beneficiaries. A financial system wholly geared to financing net zero isn’t one focused on savers and investors. Pension funds exist to generate secure incomes for pensions; insurers need to be solvent to pay out against insurance claims. Neglecting the B is a formula for financial ruin.

Carney puts the net-zero financing requirement at around $100 trillion.

“If there’s a revenue stream, then the funding is infinite,” Bank of America Chief Executive Brian Moynihan told The Wall Street Journal’s Greg Ip. It should set alarm bells ringing when bankers stop talking about risk and prudence and start talking like Buzz Lightyear. These revenue streams don’t currently exist, but one way or another, they will be created—juiced up and supported by governments and multilateral aid agencies such as the World Bank.

On the other side of the ledger, returns on investment in the production of hydrocarbon energy needed to keep the lights on and economies moving are to be suppressed, pushing up their cost. The day Sunak spoke, low wind speeds necessitated paying coal-fired power stations £4,000 ($5,400) per megawatt-hour to help keep the lights on at COP26.

Ultimately, the revenue streams Moynihan and other bankers lend against come from taxpayers and consumers. Higher energy costs and supply disruptions would make it harder to service purportedly low-risk net-zero financing. When bankers talk of the social value of bank lending, it has all the makings of a systemic financial crisis.

In 1987, shortly after the Reagan administration’s botched Savings & Loan (S&L) deregulation, University of Chicago economist Sam Peltzman warned of the dangers to bank capital when banks are induced by governments to channel credit to socially “worthy” sectors such as housing. There followed the S&L meltdown, which cost American taxpayers up to $124 billion.

Two decades later came an order-of-magnitude larger financial crisis, also with its origins in housing finance. Using the global banking system to cross-subsidize net-zero risks a financial crisis that would make 2008 look comparatively minor—much the way the S&L meltdown looks to us today.

Such thoughts must have been far from Sunak’s mind as the Glasgow COP’s host singled out British business for special treatment and announced that the UK will become the first-ever “Net Zero aligned financial center.” That vision will see businesses being forced to file net-zero transition plans policed by an independent task force.

We live in a global, interconnected world. About 62 percent of the revenues of Financial Times Stock Exchange-100 companies are generated outside the UK. Unilaterally imposing net-zero on UK-listed companies inflicts a climate tax on them, forcing them to cede market share and profits to their non-UK-listed competitors. As a former Goldman Sachs banker, Sunak knows this full well, but a costly soundbite at a U.N. climate conference is evidently worth the damage to British businesses.

“Over $130 trillion of private capital waiting to be deployed; and a greener financial system, under way,” Sunak boasted, displaying a habit acquired from Tony Blair of speaking in sentences without verbs.

Indirect climate policies are not a substitute for direct government action to suppress consumer demand for greenhouse gas-emitting activities. Using the financial system as the principal policy instrument of decarbonization will have unintended consequences and create immense distortions that threaten global financial stability and the functioning of a commercial society.

Historian Adam Tooze calls the energy transition a “historic experiment.” The climate crisis enters a new, dangerous phase as finance ministers, central bankers, and financial leaders all look to save the planet—with other people’s money.