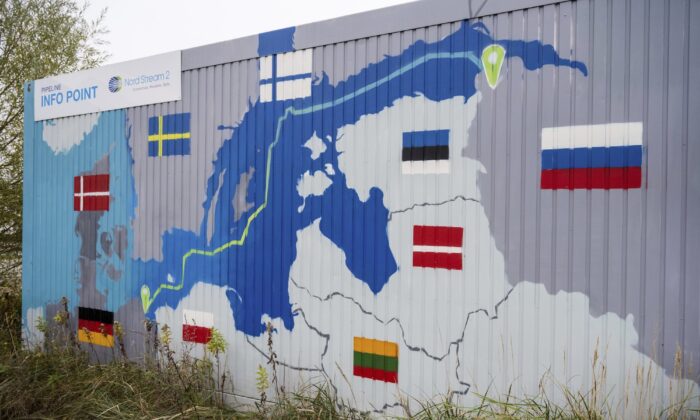 A sign reading "Nord Stream 2 Committed. Reliable. Safe." hangs above a painted map of the Nord Stream 2 pipeline from Russia to Germany at the natural gas receiving station in the Lubmin industrial estate in Lubmin, Germany, on Nov. 16, 2021. (Stefan Sauer/DPA via AP)
Viewpoints

The French essayist of Romanian origin, Emil Cioran, once said that it was astonishing that no one had ever renounced his life because of the prospect of having a biography written about him.

What he meant by this, of course, was that no one would want everything about himself to be revealed to others; we all have much to hide. As it happens, Cioran himself had quite a lot to hide, for as a young man in Romania he had been an admirer of Hitler and Hitler’s Germany and an intellectual supporter of Romania’s very nasty fascist movement. Much of his work in France after the war fell halfway between atonement and cover-up.

The life of a Western politician is dogged by something even worse than the prospect of a posthumous biography, however; namely, of being so incessantly in the public arena that every word he utters is taken down and used in evidence against him by one political enemy or another (not necessarily from a political party different from his own).

No quarter is given, no exception made. A politician’s every mistake, his every word out of place, becomes the object of mockery or moral condemnation, with the result that only those with the thickest skins and the most ravening ambitions survive in politics. This was always the case, no doubt, but instantaneous communication and social media have magnified the necessity for a thick skin a hundred-fold. No wonder our politicians are on the whole a sorry lot, being both ruthless and boring: it’s a miracle when any of them emerges unscathed and comparatively decent.

I wouldn’t like to say that in private conversation or in a public presentation I had never made a verbal gaffe such as President Joe Biden’s when, in his recent State of the Union address, he called the Ukrainians Iranians. Actually, what he said was, strictly speaking, correct: It’s indeed unlikely that President Vladimir Putin will ever win the hearts and souls of the Iranians. He isn’t really a hearts-and-souls-capturing type of person. Recently, indeed, he has emerged as more of a mind-concentrating kind of person, especially of German minds.

It’s of course rather worrying that the second or third most powerful man in the world (Biden) appeared to confuse the names of the inhabitants of a hostile and friendly nation merely because they happened to share three of four syllables. One wouldn’t make a clinical diagnosis solely on this basis, but it can hardly have convinced Vladimir Vladimirovich that he was faced by a mentally very formidable interlocutor.

Once the Russians have flattened and occupied Kiev, Lviv, Kharkiv, etc., as surely they will (for anything less would be a defeat), the question will be asked in the West, “Who lost Ukraine?”—as once the question, “Who lost China?” was asked. My preferred answer would be Greta Thunberg—or perhaps I should say, to be a little fairer, Greta Thunberg and people like her.

The Thunberg episode must have been of great aid and comfort to the man in the Kremlin, for it must have convinced him, as it convinced his apologists in the West, of the almost total decadence and fundamental unseriousness of the West. Here was a spoiled upper-middle class Swedish girl claiming that her childhood had been stolen—by whom and by what, exactly?—and no one in any position of power or responsibility had the guts to tell her to shut up and to stop broadcasting her disgusting self-satisfied and highly privileged self-pity. Instead, she was the object of deference and almost of adulation, as if she were being brave in the way that anti-war demonstrators in Russia have been brave.

Why did no one in any position of power or responsibility take on little Greta and tell her to go away? The answer, probably, is sentimentality: She was young, and everyone knows that adolescence is the springtime of idealism. To destroy the fatuous illusions of the ignorant and inexperienced is cruel; therefore, we must submit meekly to be lectured, or hectored, by them, and to do as they say. The fact that the person in question may have been as manipulated as a cruise missile was not allowed to enter anyone’s mind.

One can just imagine little Greta Thunberg trying to hector Putin or Xi: The whole idea is so absurd that it can’t be entertained for a moment. It’s precisely for this reason, that Putin wasn’t decadent enough to take her seriously even for a moment, that some so-called conservatives in the West admired Putin: the enemy of my enemy being supposedly my friend. As we now see, Putin is not anyone’s friend: But Greta Thunberg was his friend, in what Stalin would have called the objective sense.

She was his friend because she, and those who thought like her, assisted in creating Europe’s extreme vulnerability to Russia’s control over its energy supplies. We don’t want nuclear; we don’t want coal; we don’t want gas; we don’t want oil. The reality, however, is that the population does want to be warm over winter, it doesn’t want the factories to close down, and it’s quite attached to the continuous electricity supply that so far renewables can’t guarantee. Thus, the political class paid lip service to the Greta Thunbergs and their like while continuing, and indeed extending, the continent’s dependence on energy from Russia—a potentially, and now actually, hostile power. Of Prime Minister Boris Johnson’s Net Zero policy, I can barely bring myself to speak.

Putin’s hand would have been much weaker had Europe not chosen to be so abjectly dependent on Russian energy. How he must have giggled—if giggling is in his repertoire—to see the fawning reception of Greta Thunberg in the West. With what contempt must he have regarded us, he, an ex-KGB operative who believes that the collapse of the Soviet Union was the greatest geopolitical tragedy of the 20th century. Thunberg and her ilk must therefore bear some of the responsibility for bringing about the war in Ukraine.

They wanted net zero: What they got was the scramble for more nuclear power stations, more oil and gas exploration, and even a resort to coal, plus Russia into the bargain.