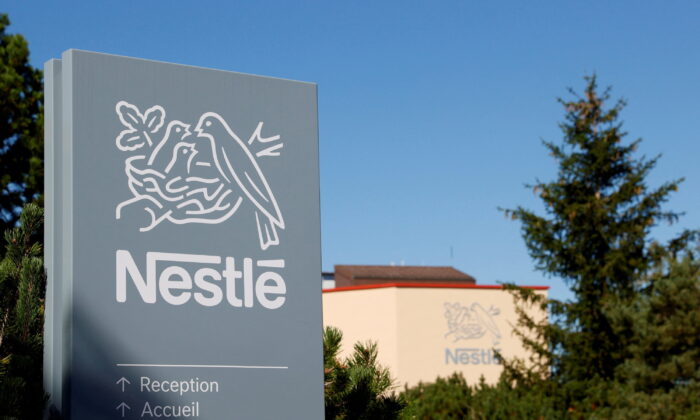 A logo is pictured on the Nestlé research center at Vers-chez-les-Blanc in Lausanne, Switzerland, on Aug. 20, 2020. (Denis Balibouse/Reuters)
Companies

Nestlé released the report of its half-year results for 2022 on Thursday, revealing that the company raised prices by twice as much in the United States as it did in Europe, as inflation continues to accelerate in both markets.

The Swiss conglomerate, which reigns as the largest food and beverage processing company in the world, issued its report with several notable takeaways which revealed much about the state of the company and international markets more generally.

Most notably, the company reported raising prices overall by 6.5 percent, after it had already hiked prices by 3.1 percent in the last quarter of 2021.

At a glance, the disparity is incongruous, as the euro has experienced devaluation because of inflation at a rate surpassing that of the U.S. dollar. Earlier this month, the dollar and euro reached parity for the first time in 20 years, as the value of the fiat currency of the European Union has fallen even faster than its U.S. equivalent (inflation rates in the other major North American market is lower yet: the Canadian dollar, for example, saw annual inflation of 8.1 percent in the same month, compared with 9.1 percent for the United States).

At the same time as imposing these onerous price hikes, Nestlé reported a notable increase in sales—9.2 percent higher compared with the year-ago period across global markets, a growth of 45.6 billion Swiss francs (worth US$47.53 billion). Net profit, however, decreased by 11.7 percent; the company attributed the decline mostly to one-time expenses, such as taxes. The company’s operating profit margin fell by 0.5 percent from last year, to 16.9 percent total, and the company has set a target for its operating profit margin of 17 percent for the year overall.

Nestlé is not alone among food and beverage companies in raising prices, even as sales continue to grow. The Coca-Cola Corp., for example, recently reported that its prices had risen by 12 percent in the most recent quarter, while in the United Kingdom, McDonald’s raised the cost of a cheeseburger for the first time in 14 years, from 99 pence to £1.19. And on Wednesday, Kraft-Heinz reported raising prices by 12.4 percent in the most recent quarter, though the company saw a modest reduction of 2.4 percent in sales.