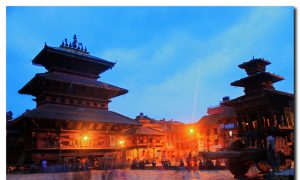 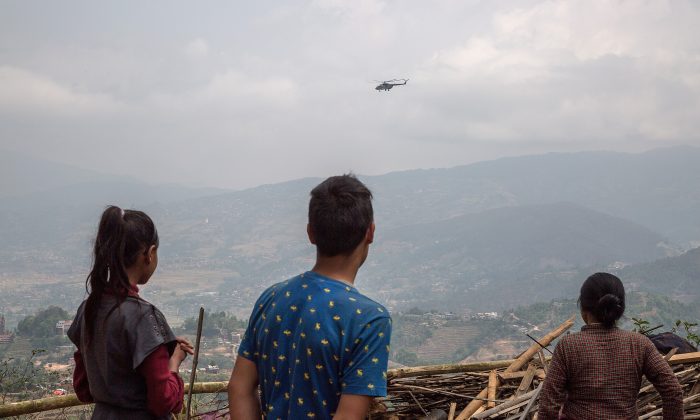 Residents look at a helicopter delivering aid in remote areas of quake-struck Nepal on May 1, 2015 in Kalchowk, Nepal. (Omar Havana/Getty Images)
Asia & Pacific

Nepal Quake Was Felt in the Upper Atmosphere, and That’s a Good Thing

About 21 minutes after the 7.8-magnitude earthquake shook Nepal on April 25, waves of energy penetrated the Earth’s upper atmosphere creating a disturbance, NASA discovered.

This observation could bring scientists closer to one day developing a system to predict earthquakes and other devastating natural disasters.

More specifically, the emitted energy disturbed electrons in the ionosphere—the layer of atmosphere located 37 to 621 miles (60–1,000 km) above the Earth’s surface—according to readings taken from a GPS station in Lhasa, Tibet, some 400 miles from the quake’s epicenter.

The two panels represent the GPS data. In the upper panel, shows the vertical total electron content (VTEC), the wave-like patterns are disturbances in the distribution of electrons in the ionosphere. The circled waves are the measurements taken after the Nepal quake.

The lower panel shows the relative strength of those disturbances using colors with red being high intensity and blue being low. The quake-induced measurements are circled.

After the Great Tohoku Earthquake in Japan on March 11, 2011, NASA researchers looked back at the ionosphere data before the event and found that VTEC of the ionosphere “increased dramatically over the epicentre, reaching a maximum three days before the quake struck,” according to MIT’s Physics arXiv Blog post.

They also looked at satellite data and saw a sizeable increase in infrared emissions above the epicentre, reaching a peak in the hours before the quake struck.

“In other words, the atmosphere was heating up,” reads the post.

Scientists hope that in studying ionosphere energy wave patterns caused by natural hazards like earthquakes, volcanic eruptions and tsunamis, as well as satellite data, they’ll be able to create models that could one day become part of early warning systems for these difficult-to-detect natural hazards. But they’re not there yet.