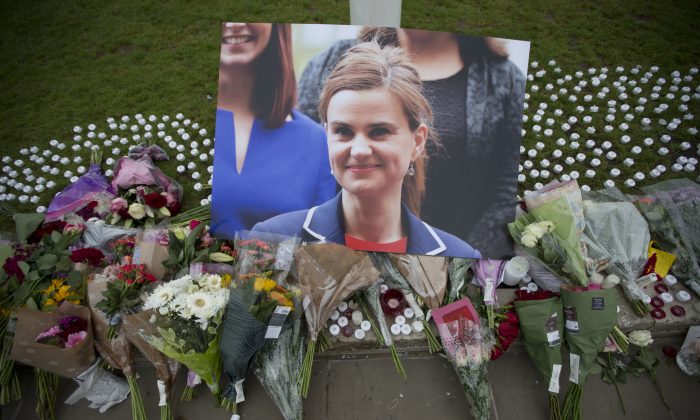 An image and floral tributes for Jo Cox, in Parliament Square, outside the House of Parliament in London, after the 41-year-old British Member of Parliament was fatally injured in northern England. (AP Photo/Matt Dunham)
International

LONDON—A white supremacist who shot and stabbed a pro-European U.K. lawmaker while shouting “Britain first” was sentenced to life in prison Wednesday for a crime prosecutors called an act of far-right terrorism.

Mair fired three shots at 41-year-old Cox with a sawn-off .22 rifle and stabbed her 15 times with a 7-inch (17-cm) dagger outside a library in the area she represented in northern England on June 16.

Mair did not visibly react as he was convicted of murdering Cox and wounding 77-year-old Bernard Kenny, a passer-by who was stabbed as he tried to stop the attack in Birstall, 200 miles (320 kilometers) north of London.

Judge Alan Wilkie sentenced Mair to life with no chance of parole for the “brutal and ruthless” killing.

The judge said the murder had been carried out to advance a political cause “of violent white supremacism associated with Nazism.”

Cox had been a prominent voice arguing for Britain to remain in the EU, during a divisive and often angry referendum campaign that focused heavily on the issue of immigration. She had also urged Britain to take in more refugees fleeing violence in Syria.

At his first court hearing, Mair gave his name as “death to traitors, freedom for Britain.” Prosecutors said his home was full of Nazi literature and memorabilia, and his computer revealed an interest in far right, anti-Semitic and neo-Nazi politics.

Mair had refused to enter a plea—leaving the court to enter a not-guilty plea on his behalf—and his lawyers presented no evidence in his defense.

Mair, who did not speak during his trial, asked to address the court after the verdict. The judge refused.

Wilkie said Mair pretended to be motivated by patriotism—but that Jo Cox was the true patriot.

“You are no patriot,” the judge told Mair. “By your actions you have betrayed the quintessence of our country, its adherence to parliamentary democracy.”

Although Mair was not charged under terrorism legislation, officials widely described his crime as an act of terrorism.

Sue Hemming, head of special crime and counter-terrorism at the Crown Prosecution Service, said Mair’s crimes “were nothing less than acts of terrorism designed to advance his twisted ideology.”

Neil Basu, a senior counterterrorism detective, said there are signs the threat from far-right extremism in Britain is growing. He said police would pursue it “with exactly the same level of resource and vigor as other forms of ideology.”

Outside court, Cox’s widower Brendan Cox said that “as a family, we will not respond to hatred with hatred.” He thanked the many people who had sent messages and gestures of support to the family.

“The killing of Jo was a political act, an act of terrorism,” Cox said. “But in the history of such acts it was perhaps the most incompetent and self-defeating: an act driven by hatred which instead created an outpouring of love.”