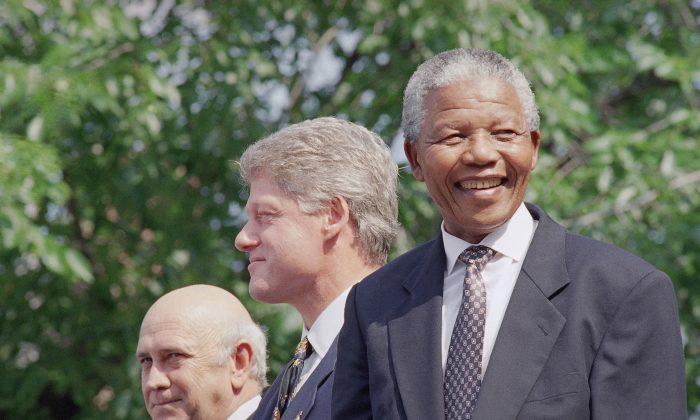 1925: Attends primary school near Qunu. His teacher Miss Mdingane gives him the name Nelson, in accordance with the custom to give all school children “Christian” names.

1939: Enrolls at the University College of Fort Hare, in Alice.

1943: Graduates with BA from Fort Hare; Enrols for an LLB at Witwatersrand University.

1948: Elected national secretary of the ANCYL. Engages in resistance against the ruling National Party’s apartheid policies. By his own admission he leaves the University of the Witwatersrand without graduating.

1951: Elected President of the ANCYL.

1953: Devises the M-Plan for the ANC’s future underground operations.

1955: Watches as the Congress of the People at Kliptown launches the Freedom Charter.

March 30, 1960: A State of Emergency is imposed. Mandela is among thousands detained.

August 5, 1962: Arrested near Howick in KwaZulu-Natal.

November 7, 1962: Sentenced to five years in prison with hard labor for incitement and leaving the country without a passport.

October 9, 1963: Appears in court for the first time in what becomes known as the Rivonia Trial. Facing the death penalty his words to the court at the end of his famous ‘Speech from the Dock’ on 20 April 1964 became immortalized:

VIDEO: Nelson Mandela’s Court Statement in 1964 before he goes to prison.

December 3, 1963: Pleads not guilty to sabotage in what becomes known as the Rivonia Trial.

June 11, 1964: All except Rusty Bernstein and James Kantor are convicted and sentenced (June 12) to life.

July 13, 1969: His oldest son, Thembekile is killed in a car accident. He’s not allowed to attend the funeral.

August 12, 1988: Admitted to Tygerberg Hospital and is diagnosed with Tuberculosis.

December 7, 1988: Moved to Victor Verster Prison in Paarl where he was held for 14 months in a cottage.

1989: He obtains an LLB through the University of South Africa while in prison. He graduates in absentia at a ceremony in Cape Town.

April 16, 1990: Nelson Mandela gives a speech at the Wembley stadium, two months after he is released from Prison.

May 9, 1994: Elected by Parliament as first president of a democratic South Africa.

May 10, 1994: Inaugurated as President of the Republic of South Africa.

1999: Steps down after one term as President, establishes the Nelson Mandela Foundation.

June 1, 2004: Announces that he will be stepping down from public life.

January 6, 2005: Announces that his eldest son Makgatho had died of AIDS.

2007: Witnesses the appointment of his grandson Mandla as chief of the Mvezo Traditional Council.

2009: Votes for the fourth time in his life. Attends the inauguration of President Jacob Zuma on May 9 and witnesses Zuma’s first State of the Nation address.

2010: Is formally presented with the FIFA World Cup trophy before it embarks on a tour of South Africa.

June 11, 2010: His great-granddaughter Zenani is killed in a car accident.

June 17, 2010: Attends the funeral of his great-granddaughter Zenani.

July 11, 2010: Makes a surprise appearance at the Final of the Fifa World Cup in Soweto.

July 2010: Celebrates his 92nd birthday at home in Johannesburg with family and friends.

October 2010: His second book Conversations with Myself is published.

November 18, 2010: Meets the South African and American football teams that played in the Mandela Challenge match.

January 2011: Is admitted to hospital in Johannesburg where he was diagnosed with a chest infection. He is discharged after two nights.

June 2011: His book Nelson Mandela By Himself: The Authorised Book of Quotations is published.

June 21, 2011: Is visited at home by American First Lady Michelle Obama and her daughters Sasha and Malia.
July 18, 2011: Celebrates his 93rd birthday with his family in Qunu, Eastern Cape.

February 25, 2012: Admitted to hospital for abdominal complaint. Discharged after one night.

January 1, 2013: Spends New Year’s Day with members of his family in Johannesburg.

September 1, 2013: Discharged from hospital, but still in poor health.