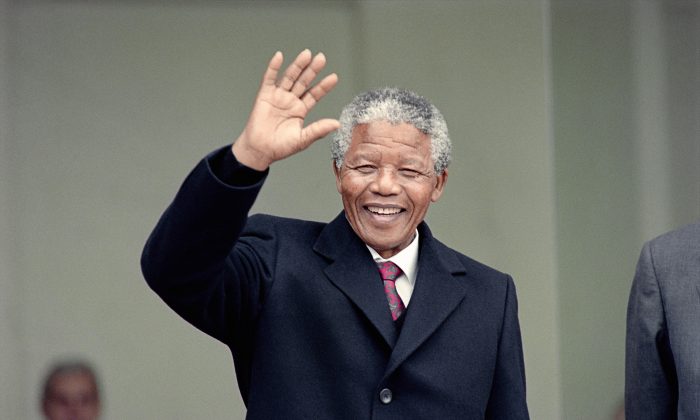 Nelson Mandela waves to the press as he arrives at the Elysee Palace, 07 June 1990, in Paris, to have talks with French president Francois Mitterrand. (Michel Clement, Daniel Janin/AFP/Getty Images)
International

Nelson Mandela: Death of a Giant

Nelson Rolihlahla Mandela’s death signals not only the passing away of a gifted politician. It is the death of one of the most significant figures of the 20th century. It is not only the death of a man; it is the physical—although not the spiritual—death of a person whose ideas illuminated the search for a better world.

Mandela, born in Mvezo, a small village in South Africa Eastern Cape Province, on 18 July 1918, came from distinguished ancestors: His patrilineal great-grandfather Ngubengcuka ruled as a king of the Thembu people. One of the king’s sons, named Mandela, was Nelson Mandela’s grandfather and the source of his surname.

Mandela’s father leadership qualities were inherited by his son. Named Gadla Henry Mphakanyiswa, he was chief of the town of Mvezo which he had to leave after alienating the colonial authorities. Nelson Mandela’s given name, Rolihlahla, already anticipated what would be one of Mandela’s personal characteristics: colloquially the name means “troublemaker”.

He started making trouble at Fort Hare University, a public university in Alice, Eastern Cape, South Africa, where he met Oliver Tambo, with whom he became lifelong friend and a colleague in the struggle against apartheid. At the end of his first year at the university he became involved in a boycott against university policies. In 1940, because of their political activism, both friends were expelled from Fort Hare.

In 1944, in disagreement with the leadership of the African National Congress (ANC) and together with a few friends, Mandela founded the African National Congress Youth League (ANCYL). In 1947, he was elected secretary of that league and later he became a member of the Transvaal ANC executive and passed the qualifying exam that allowed him to practice as an attorney.

When he was 30-years-old, following the 1948 election victory of the Afrikaner-dominated National Party, which supported the policy of racial segregation, Mandela continued to actively participate in politics. In 1952, he was one of the leaders of the African National Congress (ANC) Defiance Campaign and, together with Oliver Tambo, provided free or low-cost legal counsel to poor blacks who lacked legal representation.

He was one of the leading figures of the Congress of the People whose Freedom Chapter provided the basis for the anti-apartheid cause. As a response to their activities, the Apartheid Government in South Africa arrested 156 people, including Chief Albert Luthuli, president of the ANC and Nelson Mandela. Although the trial lasted several years, Mandela was finally acquitted in 1961.

That same year, in what was a sharp departure from ANC policy, Mandela was instrumental in the creation of the ANC’s armed wing, Umkhonto we Sizwe (Spear of the Nation) of which he became the first commander. In 1962, persecuted by the government, he was smuggled out of South Africa. When he returned he was arrested, convicted of sabotage and sentenced to life imprisonment.

He spent most of the next 27 years in Robben Island. He refused several offers from the government to ‘renounce violence’ in order to win his freedom. On 11 February 1990 he was finally released. That experience had such a strong effect on him that he summed it up by saying, “There is no easy walk to freedom anywhere, and many of us will have to pass through the valley of the shadow of death again and again before we reach the mountaintop of our desires.”

Between 1990 and 1994, after his release from prison, he led the ANC in multi-party negotiations that led to the country’s first multi-racial elections. Mandela’s role to end apartheid was recognized when, in 1993, together with South Africa’s President F.W. de Klerk, he was awarded the Nobel Peace Prize.

Mandela exemplified the philosophy of “Ubuntu,” a word that has its origins in the Bantu languages of southern Africa and which expresses an African worldview. Archbishop Desmond Tutu explained it by saying, “Ubuntu speaks particularly about the fact that you can’t exist as a human being in isolation. It speaks about interconnectedness…When you do well it spreads out; it is for the whole of humanity.”

On 27 April 1994, South Africa’s first multi-racial elections were held in the country. The ANC won with 62% of the votes and on 10 May 1994 Mandela was inaugurated as the country’s first black president. A long history of racial discrimination came to an end. “Never, never and never again shall it be that this beautiful land will again experience the oppression of one by another.”

He had fought hard for his freedom and wanted to extend that freedom to all those under oppression, a belief he stated saying, “For to be free is not merely to cast off one’s chains, but to live in a way that respects and enhances the freedom of others.” He was always concerned for the less powerful. Jessie Duarte, who was his personal assistant after his release from prison in 1990, tells how Mandela always made his own bed. Once, during a visit to Shanghai, where they were staying at a very fancy hotel, she asked him not to make his bed because he would offend the person in charge of tidying up his room. Instead of changing his lifelong habit, he asked to meet the ladies in charge of cleaning his room and explained his policy to them. “He would never insult someone who did not have power,” explained Jessie Duarte.

During his presidency, Mandela carried out a wide range of social reforms aimed at reducing social and economic inequalities in South Africa. In addition, he was actively engaged in the fight against HIV/AIDS. In 1999, he decided not to run for a second term and was succeeded by Thabo Mbeki. His concern and advocacy for social and human rights issues, however, didn’t stop and until his death he continued to be a beacon of peace and equality in the world.

Dr. Cesar Chelala is a co-winner of an Overseas Press Club of America Award for an article on human rights.