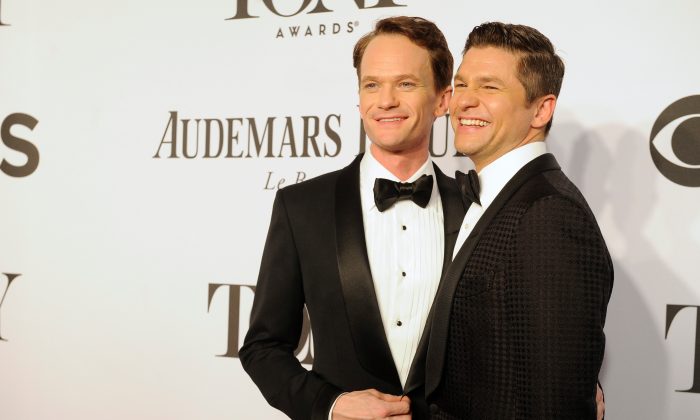 In this June 8, 2014 file photo, Neil Patrick Harris, left, and David Burtka arrive at the 68th annual Tony Awards at Radio City Music Hall in New York. The How I Met Your Mother star and his actor-chef groom were married Sept. 6, in Italy. Theyd been dating for 10 years and are parents to 3-year-old twins, Gideon and Harper. (Photo by Charles Sykes/Invision/AP, File)
Entertainment

The ‘Gone Girl’ star tied the knot with his long-term partner David Burtka at a castle near Perugia in Italy on September 6 and his friend Elton was there as a guest.

However, the ‘Rocket Man’ singer delighted the happy couple and the other guests by playing an impromptu set of his hits.

Discussing his nuptials on ‘The Late Show with David Letterman’ on Monday, September 29, 2014, Neil said: “It was fun! We’ve both been very busy – David and I – we were looking for a time that was appropriate. We didn’t want to have to do it just in a couple days and we wanted to do a destination wedding. Our first trip together was in Italy so that seemed fun. We knew a friend of a friend of a dude who had a castle. So we thought, ‘OK, that’s fun!’ There were about 50 people … Elton John sang a few songs, which was super cool. He’s a friend and I didn’t expect that. That was overwhelming.”

Elton – who is married to Canadian filmmaker David Furnish – also introduced the couple’s first dance, and Neil admits the song has special significance to him and David, 39.

The 41-year-old actor – who raises four-year-old twins Harper and Gideon – with David – said: “Our first dance was Kelly Clarkson’s ‘A Moment Like This’. We loved ‘American Idol’ season one, we were Team Kelly. That was always kind of our song. We started dancing to it and we had a plan that … when the song crescendoed – ‘Some people wait a lifetime for a moment like this!’ – fireworks are supposed to go off … Sure enough, it happened perfectly.”