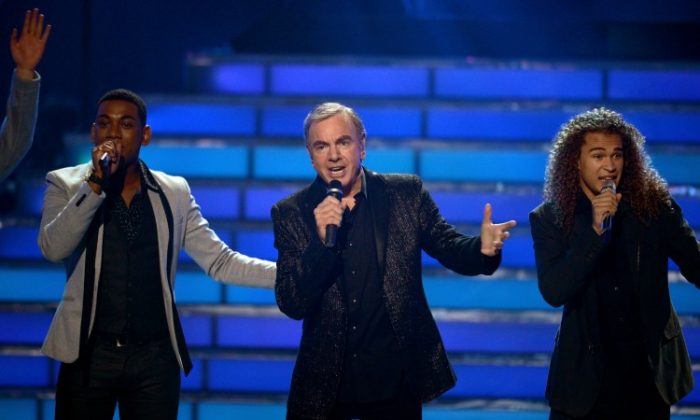 Even at 71, Diamond did not lose any of his humor. Ahead of the show on Wednesday afternoon, Diamond tweeted, “Surprise guests are planned for the American Idol finale tonight… it’s going to be so good, so good, so good! ;-)”

Diamond has had a long relationship with the FOX reality singing competition. Back in 2008, Diamond served as a guest mentor to the remaining contestants of season seven, as the contestants were to sing Diamond songs for two days of broadcasts.

Just a month ago, Diamond married his 41-year-old fiancée Katie McNeil, Diamond’s manager and producer of the documentary “Neil Diamond: Hot August Nights NYC.” They tied the knot in front of family and close friends in Los Angeles.

After performances from the senior stars and 13 of American Idol’s finalists, the official results were in. With 132 million votes counted, Phillip Phillips won the title and an official trophy that last year’s Idol, Scott McCreery, presented to him. Idol host Ryan Seacrest handed Phillips his guitar to sing his winning song, “Home.” Contestant Jessica Sanchez was the runner-up.

Overwhelmed with the announcement, Phillips never got to finish the song. As the confetti fell, the new Idol walked off the stage to hug his family.