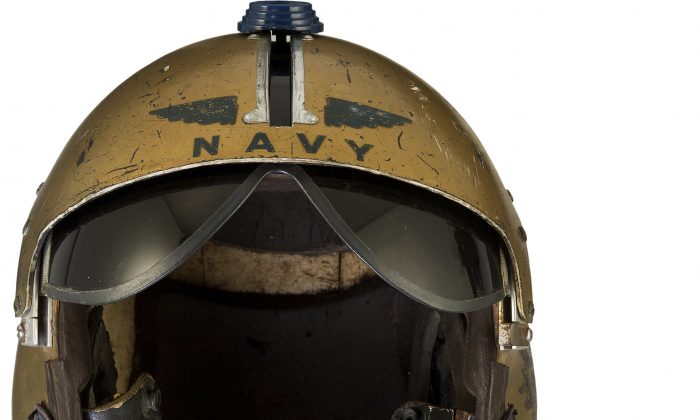 A helmet worn by John Glenn during the history-making flight, dubbed Project Bullet, in which the future astronaut set the transcontinental speed record in 1957. Artifacts owned by the late Neil Armstrong will be offered for sale by Dallas-based Heritage Auctions starting Thursday, Nov. 1, 2018, including pieces of a wing and propeller from the 1903 Wright Flyer the astronaut took with him to the moon in 1969. (Heritage Auctions/AP)
US News

DALLAS—Memorabilia that belonged to the first man to set foot on the moon, Neil Armstrong, has fetched more than $7.4 million at auction.

Dallas-based Heritage Auctions says the item that sold for the highest price, $468,500, at Saturday’s auction was Armstrong’s spacecraft ID plate from Apollo 11’s lunar module Eagle. Also sold were a fragment from the propeller and a section of the wing from the Wright brothers’ Flyer, the first heavier-than-air self-powered aircraft, which each sold for $275,000.

The flight suit Armstrong wore aboard Gemini 8, the 1966 mission that performed the first docking of two spacecraft in flight, brought the astronaut’s family $109,375.

Meanwhile, in a separate auction, a gold-colored Navy aviator’s helmet once owned by John Glenn, the first American to orbit the earth, sold for $46,250.