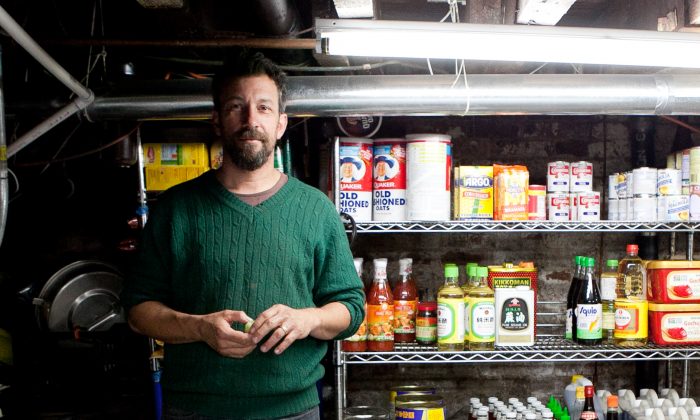 RED HOOK—Although Manhattan is visible from the ferry boats that dock just outside Red Hook’s well-known Ikea store, this part of Brooklyn’s waterfront is a world removed from the big city. The quiet streets are small-scale and have the patina of a slower, gentler era.

Hurricane Sandy’s impact on the many street-level car shops, industrial manufacturing outfits, restaurants, wineries, and other businesses was devastating. There was ubiquitous basement flooding, tens of thousands of dollars of uninsured damage, and widespread destruction of property.

Red Hook, one of the Brooklyn-Queens waterfront’s least populated areas, was at one time among the busiest shipping centers in the country. After decades of decline, the neighborhood had been on the rise again in recent years with the introduction of new businesses largely on or near Van Brunt Street.

A number of those businesses shut their doors after the storm and will never reopen, but those that stayed describe the past year as one of remarkable recovery.

At The Good Fork restaurant at 391 Van Brunt St., co-owner Ben Schneider said during an Oct. 14 visit that things are back to normal. The basement and the back garden of the restaurant that first opened in 2006 were inundated with about 10 feet of water.

“I knew the restaurant had gotten flooded,” said Schneider, who had fled Red Hook prior to the storm with his wife and two children, 3 and 5 at the time, to stay with family on the Upper West Side.

When he drove over the Brooklyn Bridge from Manhattan the next morning, Schneider said the roads were nearly empty. Though he found his restaurant had been flooded, it took him some time to realize the extent of the damage.

“Large objects were not where they used to be,” recalled Schneider. Beyond the approximately 7-foot-high ceiling basement getting flooded, the restaurant’s backyard garden had a telltale waterline, and the freestanding walk-in refrigerator had flooded and moved.

All told, the cost of damage to Schneider’s place was beyond his financial means to cover. With no help from his insurance company, he found his business at the mercy of the generosity of others. Luckily, post-Sandy New York City was full of helping hands, many of which reached out to help save The Good Fork.

Every employee showed up to help clean, scrub, refinish, and repaint. He and his business partner, Sohui Kim, got a Small Business Services loan, a grant from the city, and some assistance from the neighborhood recovery organization Restore Red Hook.

“There’s a certain bond in the neighborhood,” he said.

Schneider also said a GoFundMe.com online campaign drew in over $50,000 (though it is no longer visible on the website). But some of the most heartwarming help came from colleagues in the industry.

Small-business owners from Brooklyn’s Cobble Hill neighborhood buoyed spirits and finances at The Good Fork by handing over cash. Schneider said owners from the restaurant Lobo, winery Smith and Vine, and cheese shop Stinky Cheese all stopped by with checks.

The Good Fork reopened on New Year’s Eve. Although Schneider said things are basically back to pre-storm conditions, he can’t quite fathom the thought of going through pumping water from his basement and wrangling with the financial fallout from major flood damage again.

“The next time it might be a good idea to get out of the restaurant business.”