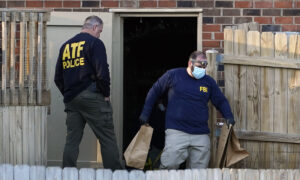 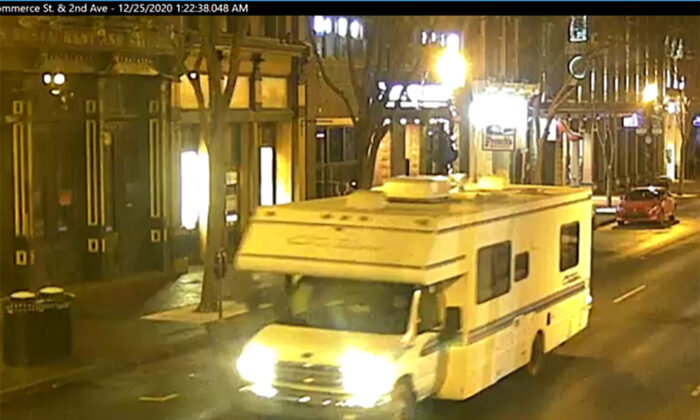 A screengrab of surveillance footage shows the recreational vehicle suspected of being used in the bombing in Nashville, Tenn., on Dec. 25, 2020. (Metro Nashville Police Department via Getty Images)
Crime and Incidents

A neighbor of the Nashville bombing suspect said the man told him last week that the world would not forget him.

Rick Laude said he saw Anthony Quinn Warner standing at his mailbox on Dec. 21. Laude pulled his car to the space to talk with Warner, inquiring about the man’s mother.

Laude told the Associated Press he later asked Warner, “Is Santa going to bring you anything good for Christmas?”

Warner smiled, according to his neighbor, and replied, “Oh, yeah, Nashville and the world is never going to forget me.”

Laude said he thought Warner meant something good was going to happen for him. He was stunned when he learned Warner was identified as the suspect behind the bombing, which took place on the morning of Christmas.

“Nothing about this guy raised any red flags,” Laude said. “He was just quiet.”

Authorities said Sunday they identified Warner through DNA evidence. They said he perished in the blast, which damaged over 40 buildings in downtown Nashville, including a major AT&T facility.

Authorities are saying they’re not sure what drove the man to carry out the bombing. Warner had no arrest record besides a charge related to marijuana in 1978, the Tennessee Bureau of Investigation (TBI) said on Monday.

“We hope to get an answer. Sometimes, it’s just not possible. The best way to find motive is to talk to the individual. We will not be able to do that in this case,” David Rausch, the TBI director, said on NBC’s “Today” show on Monday.

“It does appear that the intent was more destruction than death, but again that’s all still speculation at this point as we continue in our investigation with all our partners,” Rausch added.

Police officers responded around 5:30 a.m. to a call about gunshots being fired in downtown Nashville. They found the RV parked outside the AT&T building on Second Avenue broadcasting a message that a bomb would soon explode.

Nashville Mayor John Cooper said Monday that the explosion doesn’t appear to be consistent with a terrorist attack.

“I think everybody, the U.S. Attorney, the FBI, has been very careful not to use the ‘T’-word here, because it’s not consistent with ‘T’-word actions,” he said in a virtual appearance on CNN, adding that the there is, at this time, “no manifesto or political statement” from the suspect.

Other neighbors have shared information on the suspect.

Marco, no last name given, told WSMV that Warner would keep to himself.

“He would always be on some ladder. I think working on that antenna there. And then power washing,” he said.

Steve Schmoldt, a neighbor of Warner’s for 25 years, told The Tennessean that the man was “low-key,” friendly, and believed to be “a little odd” by some people.

Steve Fridrich, who owns Fridrich & Clark Realty, told news outlets that Warner worked for the firm as an information technology contractor until earlier this month. The business didn’t return an inquiry.