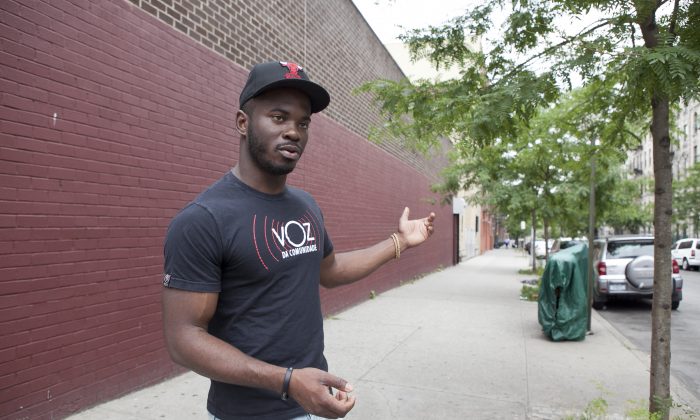 After months of heated debate, in a late night session on June 26, New York City Council passed two bills with veto-proof majorities that will increase oversight of the NYPD and strengthen racial profiling protections for people subject to the NYPD’s controversial practice of stop-and-frisk. African-American and Hispanic New Yorkers and their supporters have been fighting for years to bring the number of stops down, claiming it is hurting communities, while the Bloomberg administration and NYPD have strongly defended the practice in the name of reducing crime.

NEW YORK—When Nicholas Peart, 24, leaves his house, he never leaves without his ID, even if it is just to grab some milk at the corner store. He knows that is the first thing police officers ask for. Peart knows dressing professionally, or even carrying a yoga mat in certain neighborhoods decreases his chances of being stopped, questioned, or frisked, by the NYPD.

“I should not have to change the way I dress, but it is my reality,” Peart said. “When you are stopped so many times, you begin to think the way they [police] think.”

On his 18th birthday Peart said six NYPD officers drew their weapons on him and his friends in the wee hours of the morning at 96th and Broadway while they were sitting on a bench. After questioning the group, the police officers found nothing wrong and let them go.

Peart said the experience made him feel he did not belong on 96th Street because he didn’t belong in that community, which is predominantly white. “If there are six adults who don’t believe I belong here and think I am a criminal, what am I supposed to believe?” Peart said.

In December 2011, distraught by the police encounters, Peart penned an op-ed in the New York Times. In March 2013 he testified in the highly watched class action lawsuit, Floyd v the City of New York, that has brought attention to the issue of racial profiling concerns during stop and frisk.

Peart’s story is one of hundreds of thousands of stops each year, of which 53 percent are African-American and 31 percent are Latino. The voices for change have grown loud in these affected communities, and the City Council, despite staunch objection from the mayor and Police Commissioner Ray Kelly, passed legislation aimed to help.

After months of heated debate and skirting the committee, City Council, in a rare late night session on June 26, passed two bills with veto-proof majorities, the first passing 40-11 to create an office of the inspector general (IG) for the NYPD, the second passing 34-17 to expand the anti-racial profiling law.

The IG, appointed by the mayor, will create an independent oversight of the NYPD, including investigating policies like stop-and-frisk. Dr. Delores Jones-Brown, director of the John Jay College Center on Race, Crime and Justice, said the bill would give people an extra layer of protection outside of the police department.

The racial profiling law will allow citizens who feel they were stopped unjustly to take legal action against the city. Mayor Michael Bloomberg has been a staunch opponent of the bills, arguing the law would bankrupt the city.

The new laws provide New Yorkers with legal recourse if they feel they are stopped due to profiling. Some experts believe these measures will increase the quality of the stops. Of the 532,911 stops in 2012, only 32,206 resulted in an arrest.

Currently if anyone feels they have been wronged by the NYPD, they can file a complaint with the Civilian Complaint Review Board (CCRB), which is run by the NYPD. Peart said after the incident on his 18th birthday, he filed a complaint with the CCRB but the officer was exonerated. This made him feel that if the police could “get away with that, there is nothing else I can do.”

When asked if he would sue the city after the incident on his 18th birthday if the law was in place, Peart said he was not sure.

Kareen Mattis, who lives in the same neighborhood as Peart, said he supports the bills as a way to defend against misuse, but warns that the community will need to be educated. “I don’t want to put something out there and then have it be abused,” Mattis said.

The laws are a start, but many victims and supporters of reform feel changing mentalities is the key to real reform—something that may prove harder to change than the law.

Stop and- risk has seen a sharp increase during the Bloomberg years, going from approximately 160,000 in 2003, to nearly 700,000 in 2011. It has shaped the way many young black and Latino men see the world, and has shaped community interaction with the police.

Mattis was skeptical that laws alone would do the trick. “They will always violate our rights,” said Mattis. “Even if they change this, they [police] will find another route.”

That mentality is a common thread among many young African-American men. Khary Lazerre White, co-founder of the group Brotherhood Sister Sol in Harlem, has helped mentor many young men who have been stopped and frisked.

“People are being over-policed and made to feel like they are criminals simply for walking down the street,” White said, adding he believes the package of bills, while helpful, is only one part.

Peart and Mattis want to see the police more engaged in their communities, and willing to invest in the neighborhood.

“If they [police officers] do not want to come to Harlem, then don’t put them there,” Peart said.

Bloomberg and Commissioner Kelly have long supported stop and frisk as an effective law enforcement tool. Both point to the record low murder rate for 2012 as proof. The streets of New York are arguably the safest they have been in decades, and Bloomberg believes a reduction of stop and frisk would dramatically reverse that trend, sending the city back to the days of triple-digit murders.

In Bloomberg’s first year in office in 2001, the murder rate was 649. In 2012, it was 419. Documented stops increased much more dramatically in the same period. Then in 2012, for only the second time during the Bloomberg administration, the number of stops decreased, coinciding with the murder rate dropping.

The link between the two has been sharply debated, with advocates of stop and frisk saying the reduced murder rate is due to criminals being scared, and opponents saying it proves there is no correlation between reduced crime and the use of stop and frisk.

The next mayor may take office and decide to reduce the numbers, or he or she may improve the quality of the stops. Now there are two new tools this mayor did not have.

Many politicians have used stats this week as the legislation has been pushed through council, each with their own spin and perspective. Peart just hopes people will take a peek behind the numbers and see the people they represent.

We are not paper works, not finances, not numbers,” Peart said, “We are a community. We are human beings.”