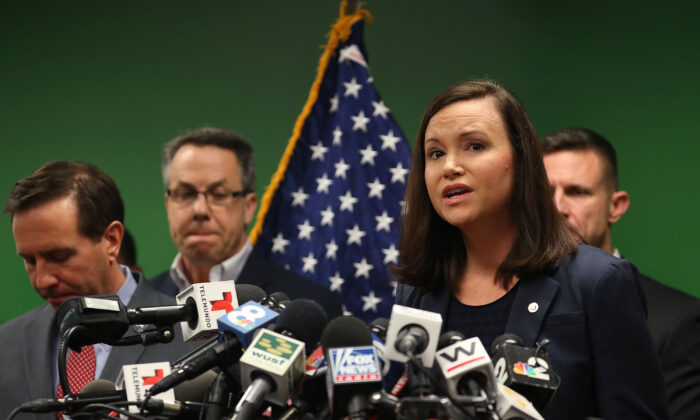 Florida’s attorney general is asking the Biden administration to declare illicit fentanyl a “weapon of mass destruction” as trafficking of the deadly drug and overdoses soar.

“Given how many Americans are being murdered, the whole federal government and every tactic and capability that we have should be utilized to stop the death and destruction that fentanyl is causing,” Ashley Moody wrote in a letter dated July 18 to President Joe Biden.

A weapon of mass destruction, according to the Department of Homeland Security (DHS), is “a nuclear, radiological, chemical, biological, or other device that is intended to harm a large number of people.” Such a designation would require the DHS and the Drug Enforcement Administration (DEA) to work with the Department of Defense to curb the fentanyl crisis, Moody said.

Fentanyl can kill in doses as small as two milligrams; the drug is up to 50 times more potent than heroin and 100 times more potent than morphine. Fentanyl is also a leading cause of fatal overdoses in the United States. In 2021, drug overdoses killed around 106,700 Americans last year, with around two-thirds of those deaths linked to fentanyl, according to data from the U.S. Centers for Disease Control and Prevention.

In a video on May 10, National Fentanyl Awareness Day, DEA Administrator Anne Milgram described fentanyl as “the single deadliest drug threat our nation has ever encountered,” adding that “from large metropolitan areas to rural America, no community is safe from this poison.”

“Given how many Americans are being murdered, the whole federal government and every tactic and capability that we have should be utilized to stop the death and destruction that fentanyl is causing,” she said.

Moody wrote the letter just days after the DEA announced the confiscation of about 1 million fake pills containing fentanyl in Inglewood, a city in Los Angeles County that the DEA found to be a “major transshipment hub” for illegal drugs coming over the southwest border.

The seizure, with a street value of about $15 million to $20 million, was the largest the agency has made in the state.

On July 19, the DEA’s Los Angeles field division revealed that another 100,000 fake pills containing fentanyl were confiscated during a traffic stop search. Two Arizona men have been detained and face federal charges.

“Fentanyl overdoses are the leading cause of death for Americans ages 18-45, and the Southern border is our nation’s top source of fentanyl,” Rep. Young Kim (R-Calif.) told The Epoch Times, adding that she was grateful for the law enforcement “on the frontlines of detecting these dangerous drugs and cracking down on drug cartel organizations.”

As the “border crisis continues to directly impact the public health and safety of communities in our backyard and across the nation,” a comprehensive strategy is needed “to secure our border at every mile,” said Kim, who in March introduced the Comprehensive Southern Border Strategy Act to better allocate resources for border patrol officers.

Moody isn’t the only official seeking to label fentanyl a weapon of mass destruction.

“The saddest thing about the fentanyl crisis is that it is preventable,” she said in a statement at the time.

Customs and Border Protection seized more than 11,000 pounds of fentanyl at the border in 2021. A report that year by the U.S.–China Economic and Security Review Commission said that China remains the main source of illicit fentanyl and fentanyl-related substances trafficked into the United States, increasingly via Mexican cartels.