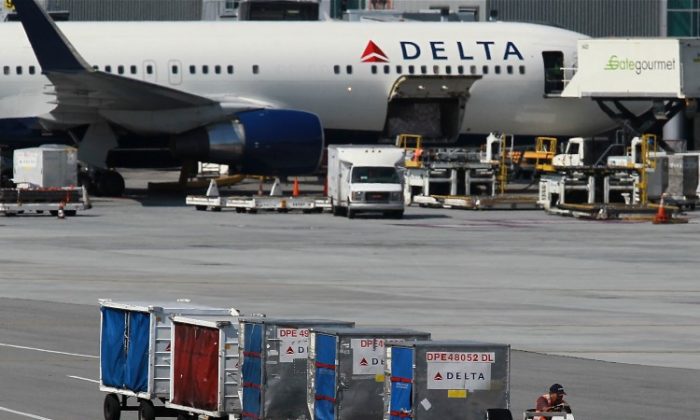 A baggage cart drives by a Delta Airlines plane at San Francisco International Airport, July 2011. The commercial airline giant this week signed an agreement with online retailer Amazon.com Inc. to provide passengers the ability to navigate to Amazon’s homepage and purchase items from any Wi-Fi enabled laptop, smartphone, or tablet computer. (Justin Sullivan/Getty Images)
US

Passenger Jim Tonjes, who was aboard a Delta Air Lines flight from Amsterdam to Minneapolis on Sunday, experienced a strange encounter when a sewing needle pointy on both sides jabbed him as he took a bite of his sandwich, according to The Huffington Post.

Tonjes, who was returning to the United States from a visit for his mother-in-law’s 90th birthday, is on pills for 28 days to ward off infections, including hepatitis and HIV. The medical cost adds up to $1,400.

Tonjes was not alone in his experience. Gate Gourmet, the caterer that supplied the sandwiches to Delta, said in a statement to The Epoch Times that the needles were discovered in six sandwiches on four flights inbound to Atlanta, Minneapolis, and Seattle from Amsterdam’s Schiphol airport.

Gate Gourmet has removed all sandwiches from future flights out of Amsterdam and has launched an investigation into the cause. “We are treating the situation as a criminal act,” Gate Gourmet said.

After the incident, Delta said it has “taken immediate action” to ensure the safety and quality of the in-flight food.

The FBI and Schiphol airport’s police department have opened criminal investigations, although the U.S. Transportation Security Administration does not view the matter as a national security threat.

The Epoch Times publishes in 35 countries and in 19 languages. Subscribe to our e-newsletter..