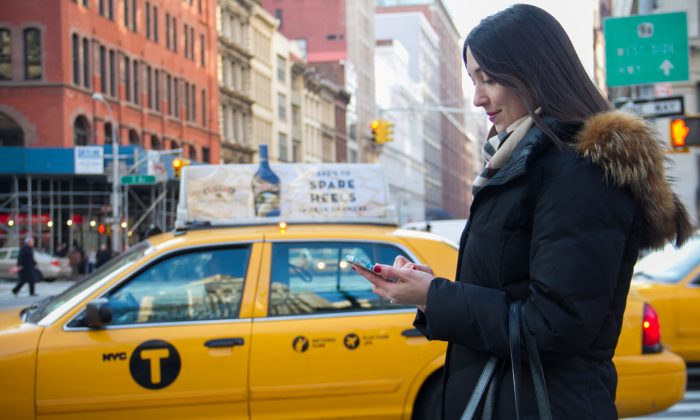 Vanessa Panotas, uses her iPhone on 23rd Street in New York City while a NYC taxi drives by on Nov. 29, 2012. Already in use in Chigaco and Boston, New Yorkers may soon be able to hail taxis using their smartphones. (Benjamin Chasteen/The Epoch Times)
New York

Innovation in the yellow cab industry has been criticized for moving at a pace that makes Midtown traffic seem speedy, but in the past year it has become increasingly evident that the heat from tech companies in the car service industry are lighting a fire under the hundred-year-old industry.

Together, Creative Mobile Technologies (CMT) and VeriFone Systems control the payment systems for New York City’s nearly 20,000 yellow taxis. Earlier this month, the companies announced an app partnership in an attempt to create the universal e-hail.

CMT and VeriFone have developed the apps Way2ride and RideLinQ respectively. These are the companies that, as the press release stated “brought credit card technology in taxicabs into everyday use, heralded a new era of convenience for taxi riders,” a move that critics say came much too late to New York City. In fact, payment contracts were what held up the Taxi and Limousine Commission from launching the e-hail pilot.

As Crains New York reported, the two companies have long been at odds, quite vocally, and CMT has even sued VeriFone over ad placements. But these companies stand to make a substantial amount from popularizing e-hails. They currently receive 5 percent on each credit card payment (totaling $75 million this year), plus additional ad revenue.

The problem? There are few who have heard of the apps Way2Ride and RideLinQ compared to Uber (there are also still plenty of yellow cab-frequenting New Yorkers who have not heard of Uber).

How to Hail a Cab

A medallion or base owner can partner with as many TLC-approved apps as he wishes to, but so far, e-hails have not been habitual. According to a 2013 TLC report on the e-hail pilot, the majority of these hails are actually made in the where street-hail-liveries are most popular—areas just slightly outside where yellow taxis normally cruise.

In many ways it seems counter-intuitive to open an app or two to try to hail a yellow cab when there are several cruising by in Midtown Manhattan.

The hundred-year old yellow cab industry, which does not spend a single dollar on marketing annually, may have to change its habits.

After lengthy lobbying efforts, the TLC approved three companies in an e-hail pilot in 2013. This means passengers could use an app like Hailo to hail a yellow taxi, but only if yellow taxi medallion owners and base owners signed up with Hailo to be included on the app.

“With certain apps, drivers have to make an effort to be involved,” said Erhan Tuncel, a full time taxi driver and managing director of the League of Mutual Taxi Owners (LOMTO), which represents about 3,000 driver-owners.

If there is one app customers knew they could use to access the entirety of New York City’s yellow cab fleet, that could provide leverage, according to Tuncel. “It just makes it easier,” Tuncel said. “In terms of competing with Uber, I see that as a positive thing.”

But, he said, it may take some time for the app to be refined and for it to catch on.

E-hails have been slow to take off in New York City, where there is an abundance of visible yellow cabs. Livery cars, which cannot take street hails, present a different story. Part of Uber’s success has been making the thousands of black cars in New York City more accessible via app instantly, where before they were requested in advance by phone (TLC’s numbers show there is a higher increase in Uber driver numbers than new for-hire drivers total). TaxiMagic, an approved e-hail pilot partner, earlier this year re-branded itself to reach out to the livery and black car market as well.